You are here: Home \ Environment \ Health \ The Fukushima Disaster- Are there more to Follow?
Environment
0

The nuclear disaster in Japan on 11th March 2011 is considered to be one of the most harmful nuclear disasters ever. The disaster was a failure in three out of the six nuclear reactors at Okuma, Fukushima in Japan. The cause of the failure was a powerful tsunami which hit the site and resulted in […]

The nuclear disaster in Japan on 11th March 2011 is considered to be one of the most harmful nuclear disasters ever. The disaster was a failure in three out of the six nuclear reactors at Okuma, Fukushima in Japan. The cause of the failure was a powerful tsunami which hit the site and resulted in the release of a large amount of radioactive substances in the ocean.

The tsunamis, as researched later, were a result of the Tohoku earthquake, measuring 9.0 on the moment magnitude scale. The Pacific Ocean is one of the most earthquake prone regions on the planet and suffers the most number of earthquake hits annually. Japan, the island country, lies in the Pacific Ocean and suffers the hits, one of them being so dangerous that it raised a tsunami and destructed the nuclear reactor. 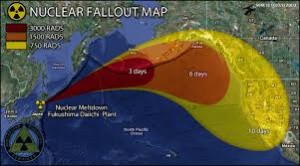 The impact of the radiations can be seen, and with this speed, it will affect many parts of the world.

The event did not gain mass popularity because it did not have much short term harms, but since then, the harmful effects of the disaster are turning up day by day. The first and the foremost effects were on local residents. The disaster affected the lives of about 300,000 people who had to evacuate their houses because of facing danger from radiation. The sudden evacuation was met by insufficient back up plans, resulting in poor shelter and medication facilities, which resulted in more than 1600 deaths.

Along with affecting the life and property in the area, the massive destruction has been caused to the aquatic life. Millions of fished have been found dead all over the world in the past one month. Every day, some new incident of thousands of fishes found floating in one or other part of the world is observed. And the blame goes to none other than the Fukushima disaster.

Along with causing harm to fishes, other aquatic animals including octopus and turtles are found floating in some parts of the world. This also indicates a huge loss to the flora beneath the oceans, thus, the destruction is incalculable. 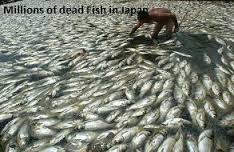 The disaster has left millions of fish dead, making it one of the the most destructive nuclear disasters ever.

This also has given warnings related to the health of the people eating fish. Fish form an important part of the staple diet for those living near the sea. The release of radioactive substances has made the fishes consume this substance, though in very dilute solution. But this has raised a question whether the consumption of the fish should be continued or it should be stopped in many areas of the world. The people living near Fukushima have said that they do not consume fish anymore, because of the health risks involved. 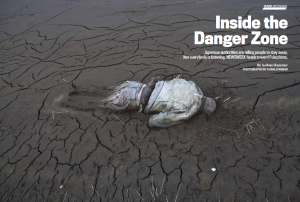 The disaster attracted concerns from media all around the globe. One of them displaying the picture.

And the problem does not seem to end here. The clean-up process is yet to take decades, because it is not easy to carry on the work in a radioactive environment. Therefore, the longer the time, the more harm it will cause to the environment. Although the workers are trying hard to lower the leaks, but the improvement is not substantial and continues to threaten the aquatic life.

The most earthquake prone area, with 90% earthquakes of the world, the Ring of Fire has been hit by the earthquakes, large and small, time and again. With such geographical location, the disaster of Fukushima has attracted concerns over Japan nuclear seismic design standards. A study by Stanford researchers also hints at more disasters like these, because other plants in Japan were not strong enough to face without harm, such potential tsunamis. 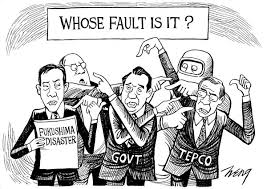 The cartoon says it enough.

The reaction of the government and the people as residents of one of the most earthquake prone areas has come into light. The citizens are ordered to keep a first aid kit along with an emergency kit and other important material in order to survive any emergency. The buildings are redesigned in order to keep them safe from earthquakes. But the safety standards of the nuclear reactors barely match the safety standards of the residential areas.

And it is the reactors which are causing harm to the environment. The incident of 2011 has caused a huge destruction to the aquatic life, by killing innumerable number of fishes. And there are more to die. What is done cannot be undone. Instead, some safer designs which can afford the ever occurring earthquakes and tsunamis would prevent any such disaster in the future, preventing a huge loss of human life and aquatic life.