Some of the most important strategies for energy efficient design take the climate, open spaces, natural features, street and building orientations into consideration. There is a definitive relation between built forms and open spaces. This affects the climatic response of a building. One must keep the following points mind at the preliminary stage itself to […]

Some of the most important strategies for energy efficient design take the climate, open spaces, natural features, street and building orientations into consideration. There is a definitive relation between built forms and open spaces. This affects the climatic response of a building. One must keep the following points mind at the preliminary stage itself to promote green design.

If the width of open space is twice the height of the building then the airflow within the open spaces reaches to the ground level. The built pattern, especially when in context with height of the building, in relation with open spaces is important as it increases decreases or modifies air speed. Together they affect the quality of air movement and heat loss or gain thus making hot, cold or humid conditions which can be bearable or unbearable.

Shading reduces heat gain by open spaces. In winters since the sun is at lower altitude even low buildings shade larger open spaces. For shading open spaces in summers buildings will have to be tall as the solar altitude is high. Compact planning minimizes heat gain and heat loss. Large heat production of modern buildings makes compact planning inappropriate in hot region due to decrease in heat loss capacity. If open spaces are smaller in size, then they absorb less amount of heat during the day. Thus during the night, less amount of heat loss takes place due to re-radiation. 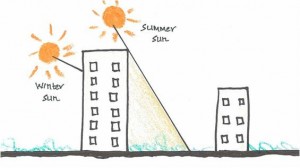 Streets form a considerable part of urban open spaces and play a significant role on urban microclimate. A form and placement of that building creates a particular set of relationships with the streets to create distinct microclimate around the building. The urban streets vary in geometry as defined by height/width ratio (H/W) and Length/width (L/W) and also the orientation that is defined by its long axis. These parameters directly influence the absorption and emission of solar radiation and also urban ventilation which have a significant impact on the temperature variations within the street as well as the surrounding environment.

Orientation of the building is generally used to refer to solar orientation which is the siting of building with respect to solar access. The prime parameter is Radiation.  The building orientation determines the amount of radiation it receives. The orientation, with respect to air patterns, affects the amount of natural ventilation possible. The orientation of a building is determined by various factors like: climatic factors of wind, solar radiation, the view, noise and requirements of privacy which may, at times, override the climatic consideration.  Balance urban patterns of street and blocks can be oriented and sized to integrate concerns for light, sun, and shade according to the priorities of the climate (Heating, cooling, and day lighting).

It is difficult to generalize, but as east west facing walls receive the highest intensities of radiation, if they must be used on these sides, should be kept as small as possible. The west side which receives its maximum radiation during the hottest part of the day can be particularly troublesome.East and west facing walls should normally be kept as short as possible. It can be taken as a rule that the optimum shape has the minimum heat gain in summer and the minimum heat loss in winter. Based on certain studies, in every case the most satisfactory shape is one in which the building is elongated in some general east-west direction.

Wind is movement of air from high pressure to low pressure. The orientation and layout of streets has a significant effect on the access to wind and on the microclimate around buildings. Parallel streets promote better wind movement and help to cool streets in summer. Perpendicular streets reduce flow of wind. Perpendicular streets, discontinuous streets with many T- intersection helps to slow down or block cool winter winds and hot dusty winds in streets.Oblique streets orientation creates two sides of the building with positive pressure and two sides with negative pressures, thus maximizing cross ventilation in the building. For summer cooling, streets oriented 20-30 oblique to summer winds, it maximizes wind flow.

Ground character is another characteristic. Depending on the ground surface, incident radiation can be absorbed, reflected, or stored and reradiated (radiation emission following the absorption of incident radiation) later. In other words, radiative heat gain could either be decreased/ increased during the daytime or increase during the night time by providing different surface materials. The ground surface would also reflect daylight. Especially in sunny climates this could lead to uncomfortable glare. The portion of solar radiation which reaches the earth raises the temperature of the ground; the amount depends on latitude, the season, the slope of the ground, the hour of the day and the nature of the terrain. This could be used to our advantage while designing depending on the climatic context. 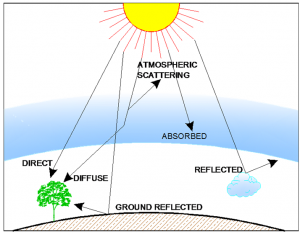 In hot climates ground surfaces should preferably be green in order to minimize heat gain. Here hard surfaces and paving are unavoidable they should be rough but not very dark. This would make the ground less reflective but not highly absorptive. In cold climates heat gain would be maximized by reflecting the heat or storing it. Ground surfaces should preferably be paved dark but smooth. This would increase absorptivity and reflectivity. In humid conditions ground character is of consequence only when it can absorb moisture. For this reason also, hard paving should minimized and, where necessary, should be rough.