You are here: Home \ Environment \ Going Green \ Technology vs Environment- What is the solution?
Environment
0

Technology vs Environment- What is the solution?

Today, the entire mankind has been trapped in a web of technology and science. With innovation in technologies, we are coming up with gadgets and machines which make our life easier. Even, some places are preferring machines over human labour. So, are we striving towards a machine world? We are passing through an era of […] 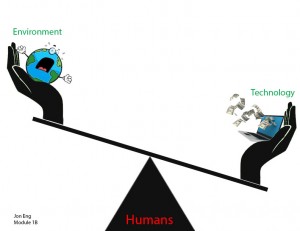 The balance is disturbed- be alert!

Today, the entire mankind has been trapped in a web of technology and science. With innovation in technologies, we are coming up with gadgets and machines which make our life easier. Even, some places are preferring machines over human labour. So, are we striving towards a machine world? We are passing through an era of  ‘ technology vs environment’ dilemma. We are at crossroads where shortcuts are available at every step,but there lacks an alternative technology which can promote its growth and developmental requirements and eventually doesn’t threaten its habitat, surrounding, ecology and the environment.

The only thing constant in our lives is change. This seemingly weird paradox has quite a number of practical implications when it comes to real life, and technology is one element that adheres to this concept. It has changed our lives for the better. With the ever-changing needs and requirements of the human race, technology has provided solutions to all our problems. Be it the pen that we use to write this article or hammer that we use to drive a nail or the lightning-fast computers that we use to solve complex problems or the pharmaceuticals that cure diseases- technology has helped people create the world that we see around us.
But, just as every worldly entity in this world has both good and bad to it, so does technology. While, on one hand, making our lives easier, technology has also had a devastating effect on the environment and to our planet. Other than making our life comfortable, technology punishes us too by polluting and degrading the air, land, water and the whole biodiversity existing on the earth. So technology is a boon or a bane for us? Let us decide.

In the modern world, the internet is one phenomenal piece of technology that needs little mentioning of how it has positively changed our lives. With its amazing power to unite the whole world into a global village, internet has made communication easier more than anything else. Another piece of technology that has impacted our lives for the positive is the mobile phone. Just imagine a single day in your life without your mobile. Well, even the thought of this can be troubling for some of us. The electricity we use to run our Air conditioners at our place for our comfort only. The vehicles we use for going to office, the clothes we wear, the easy and comfortable life we lead today, all are the results of innovation in technologies from time to time. It prove that how close we are to technology and our dependency on it.

But yeah, just as I mentioned, to everything there are both upsides as well as downsides.  On the negative side, technology has been a source of major world catastrophes, classic examples being those of World War I and World War II, when a myriad of weapons of mass destruction were produced, which resulted in a huge number of casualties. There is also a constant threat of nuclear radiations to human life – be it the recent Fukushima nuclear crisis in Japan or the Chernobyl disaster in Ukraine, way back in 1986. The latter, in fact, is believed to be the costliest nuclear accident in history, when more than 1.7 million people were directly affected by the crisis. These warfares cost a lot to mankind and even today we are facing the problem related to it.

Another aspect of technology worth discussing is how it degrades the environment and how it has been the main culprit for the polluted atmosphere.  The technology we are using nowadays, costs a lot to the biodiversity. The ACs we use at our homes and office releases harmful effluent in the air called Chlorofluoro carbons (CFCs) which depletes the ozone layer above in the stratosphere. Ozone layer is the protecting covering in the atmosphere which protect us from the harmful UV radiation by the sun. The modern vehicles which we run on fuel leave bulk of harmful gases in the atmosphere like carbon dioxide, oxides of sulphur and nitrogen etc which is the main reason behind the imbalance which we see today. Irregular rainfalls, rise in temperature across the world, rise in sea-level etc. are the results of the technologies which once we used for our comfort  are now making us to think about our end. So do we really need to chose between technology and environment. Ofcourse not! All we have to do is just maintain a proper balance that will benefit both the environment and the mankind. 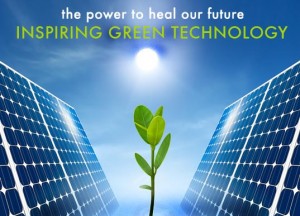 From there comes the idea of green technology solutions. Technology can play three different roles with respect to the environment-

1. Environment protection- This can be done through using highly efficient machineries which minimise the release of harmful chemicals in the air. Thereby, protecting and purifying the environment as a whole.

2. Resource management- It is the innovation in technologies from where came the idea of Recycling, Waste management, Treatment of chemicals before releasing into air etc. As a result, optimum use of resources are done and sustainability is promoted.

3. Eco-development- it stresses the evolution of human society and the ecosystem on an equal basis. The principle behind this is to ecologize the economy.

At the end of the day, technology is just like a piece of paper. It is possible that the single piece of paper could be the starting page of a wonderfully scripted book, or it could simply be crumpled and thrown out along with a pile of garbage or even worse, it could be lit up and used to scathe the environment – it all depends on how you would want to use it, constructively or destructively. But yes, technology definitely does have more pros than cons, though the line of distinction is becoming narrower by the day.