You are here: Home \ Environment \ Science \ Urban Sprawl: How it Works
Environment
0

Urban Sprawl: How it Works

Urban sprawl can be easily understood as the spreading of a city or its suburbs. Also known as sprawl or suburban sprawl, it often involves the construction of residential and commercial buildings in undeveloped land at the outskirts of a city. This extended expansion of cities is quite rapid and is often characterized by low-density […]

Urban sprawl can be easily understood as the spreading of a city or its suburbs. Also known as sprawl or suburban sprawl, it often involves the construction of residential and commercial buildings in undeveloped land at the outskirts of a city. This extended expansion of cities is quite rapid and is often characterized by low-density residential housing, single-use zoning, and increased reliance on the private auto mobile for transportation.

As there are two sides to a coin, similarly there are two major concerns over this issue. One side is about the negative consequences this sprawl has on the residents and the local environment while on the other hand, urban sprawl is a proof of the positive growth of a local economy.

The process of urban sprawl is quick and not gradual as often supposed. The amount of land used per capita is way much more than in densely populated city areas. This goes on to be another key characteristic feature of an urban sprawl. Also, wide streets, large lawns and landscaping is typical in this pattern. Single-use zoning is also a common part of this phenomenon. This approach of planning includes separation of residential, commercial, and industrial areas from one another, usually by a distance that is not conducive with walking. This in turn increases the importance of vehicles. While public transportation maybe available but most of these areas are dependent on the usage of cars. Though urban sprawl is common in developed countries, it is not limited to them only. 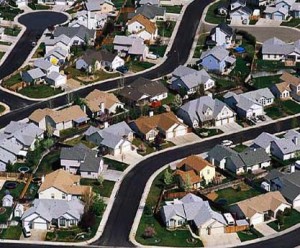 What are the causes for Urban Sprawl?

There are many factors that may contribute to an urban sprawl. One maybe to accommodate a rising urban population; however, in many metropolitan areas, it may result from a desire for increased living space and other luxurious residential facilities.

Population only does not account for increase in metropolitan area’s urban extent. While urban sprawl may have occurred in areas experiencing population declines, at the same time it has also occurred in other areas with rising populations experiencing little urban sprawl, especially in developing countries. Other reasons which are often cited as the main macroeconomic drivers of urban sprawl are economic growth and globalization. Increased affluence, attractive land and housing prices, and the desire for larger homes with more amenities (such as yards, storage space, and privacy) also play significant roles at the level of the individual. Many experts also believe that weak planning laws and single-use zoning also contribute to urban sprawl.

Urban sprawl has been correlated with increased energy use, pollution, and traffic congestion and a decline in community distinctiveness and cohesiveness.

This phenomenon leads to the destruction of wildlife habitat and to the fragmentation of remaining natural areas.

Energy for heating, cooking, cooling, lighting, and transportation is largely produced by burning fossil fuels (such as gasoline, home-heating oil, natural gas, and coal), this contributes to air pollution and global warming.

The term urban sprawl has negative connotations attached to it. This is because people residing in sprawling neighbourhoods tend to drive more than those who live in the city to reach their jobs in the city or other employment areas. This leads to increased air pollution. Also, air pollution produced by gasoline-powered auto mobiles can combine with other pollutants from industry to form photochemical smog. Obesity is also an outcome of urban sprawl as walking or bicycling is not a viable option for commuting from the outskirts of a city into town. This amount of low level of activity increases the risk other health problems such as heart disease, high-blood pressure and diabetes.

Another effect is water overconsumption and water distribution problems. A typical low-density or suburban community uses more water than a high-density city community. Landscaping is the primary culprit for this excessive use of water. Though the next problem may not be as widespread as it has been in the past, but it’s present nonetheless. The important issue of the increased racial and economic disparity. This creates stratification among the people on the basis of location. It also creates funding problems for the core, which directly affects the money available for education, crime prevention, and maintenance and upkeep. Urban sprawl leads to racial segregation as minorities are often left behind in the poorest parts of a region.

Threat to the Environment

One of the most obvious environmental effects of widespread building construction is the destruction of wildlife habitat and their surroundings. Natural land is ploughed under, graded, and paved to make way for the construction of residential areas and work spaces. Even slow-moving streams are channelled to provide more efficient drainage for housing tracts and commercial areas. Although small areas of wildlife habitat may remain, but they are not sufficient enough to support all the native species which were already dwelling in that area before. This is the reason why the wildlife is forced to cross dangerous human-dominated landscapes to find food or mates.

Other than the wildlife, the soil also gets affected by urban sprawl. The water absorbing vegetation and permeable soils gets replaced by vast areas of impermeable surfaces for building up spaces for humans. Residential and commercial roofs, roads, and parking spaces for auto mobiles greatly impede the absorption of water into the soil. There is always a risk of local flooding as rainwater and snow melt run off these surfaces which may quickly pool in areas of low elevation. Sometimes chemicals present on pavement at the time of rain are carried with this run-off, reducing the water quality, disturbing the ground water table and threatening the aquatic ecosystems.

These negative consequences associated with an urban sprawl must be taken seriously while considering the fact that this type of development pattern provides relatively affordable housing opportunities and a seemingly better quality of life.