You are here: Home \ Environment \ Water and Industrial Pollution
Environment
0

Water Pollution of surface and ground waters is largely a problem in the wake of rising population, rapid urbanization and industrlization. The large-scale urban growth has increased domestic wastes while the industrial development manifested either in the growth of new industries or in the expansion of the existing established industries has augmented industrial wastes, the […]

Water Pollution of surface and ground waters is largely a problem in the wake of rising population, rapid urbanization and industrlization. The large-scale urban growth has increased domestic wastes while the industrial development manifested either in the growth of new industries or in the expansion of the existing established industries has augmented industrial wastes, the discharges of which into lakes or water courses have brought in hazard of water pollution. Sometime back in our country, the waste effluent from Barauni oil refinery near Monghyr, in polluting waters of river Ganges highlighted the problem. A subsequent survey has indicated many of the major Indian rivers, notably in the states of Gujarat, Uttar Pradesh, Jammu and Kashmir, West Bengal and in Southern States having large industrial establishments and located near their banks, are being polluted by the direct discharges of the industrial wastes. 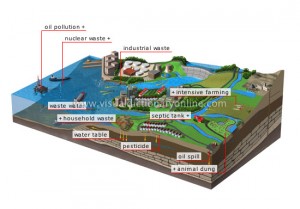 Pollution in a body of water is caused by the introduction to it of objectionable material. Pollution may be natural or artificial i.e., caused as a result of man-made activities. Natural Pollution is related with adverse weather condition viz., intense rain, sudden thaws etc. This may consist of run-off from land carrying silt, vegetable matter, manure etc., washed into a water course during a storm or following erosion of river banks and valley slopes. Natural Pollution being intermittent and restricted in short reaches of rivers is of little consequence.
Artificial Pollution is mainly caused by wastes from household, industries and agricultural lands. The domestic wastes include human excreta, urine, washings, kitchen and laundry wastes which do not receive any treatment and are directly discharged into reservoirs or water courses. This problem is particularly true of unsewered small towns and cities situated close to the flowing rivers. With the increase in pollution and growth of urban areas, there is a consequential increase in the discharge of these wastes, thereby augmenting the pollutional load on the receiving waters. Industrial wastes comprise of organic and inorganic chemical substances in minute or colloidal suspension which undergoes microbial decomposition resulting in products odoriferous or unacceptable is taste or appearance, or harmful to human beings. Thus, alkaline wastes from textile mills, lime water from tanneries, starchy water from distilleries, pickling acid from steel plants, evil-melting processes, water from sugar mills etc., contribute materially to pollution of river or bodies of waters into which they are let in without any prior treatment. The agricultural wastes are primarily due to the farmland drainage or washing in of chemical fertilizers, insecticides, pesticides, and herbicides into surface or ground water sources. With the impetus on agricultural development, the increasing use of such chemicals without forethought a health hazard involved is bound to accentuate the pollution problem.

The principal effect of pollution is to deplete through the excessive organic load, the dissolved oxygen content of receiving water to a point that the stream becomes incapable of exercising the self-purification process. The DE oxygenation may be sufficient to destroy practically all the fish and other aquatic life. The water pollution may further lead to stream insanitation by causing suspended solids to deposit on the stream bed causing silting, the organic matter undergoing putrefaction with the solid matter buoyed up by gas rising to the top and resulting in floating masses of evil smelling and unsightly sludge. The use of polluted water downstream by communities for their daily requirements would mean taking an unsafe and unwholesome supply of water which may cause the sporadic outbreaks of waterborne diseases. The Delhi infectious hepatitis (jaundice) epidemic of 1955-56 caused by the pollution of the Jamuna River water which is the potential source of the city water supply from the Najafgarh drainage is a glaring example of this nature. A vast population of India resides along the banks of rivers and the many bathing ghats located thereon, receive water polluted by the industrial charges upstream of rivers and the many bathing ghats located thereon, receive water polluted by the industrial discharges upstream of rives so that the utility of such water for bathing and recreational purposes cannot the aesthetically good. The polluted waters are also difficult to be easily treated and it is found that the treatment plants have to incur increased costs in handling such waters. 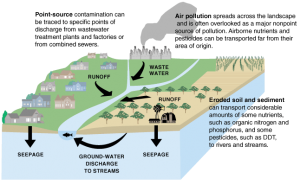 These include public consciousness, industrial cooperation and legislative control. Already, water pollution has raised sufficient alarm and people everywhere are becoming increasingly conscious of the hazards of water pollution. Nevertheless sufficient publicity and effort are needed to educate the necessity of keeping ponds and streams flowing nearby, clean and unpolluted.
Industrial cooperation envisages adequate pre-treatment of all such industrial wastes which are of toxic nature before being discharge into municipal sewers or into water courses. It may be pointed out that it is not always necessary to treat the entire industrial waste as such, provided certain in plant measures.

The legislative control is a necessity to counter effectively all possible violations of pollution control practices. Water pollution being a national problem, the necessity of having such a control cannot be less emphasized. This has resulted in setting up of waste water treatment plants in a number of industries in order to bring down the pollution level within the acceptable limits prior to disposal.