Water is every living being’s lifeline that plays dual role- it bathes us and feeds us. Right from the ancient time water represented the very essence of life. Water has not only played a role in the history of countries, but also in religion, mythology, and art. Most religions believe that water cleanses the souls. […]

Water is every living being’s lifeline that plays dual role- it bathes us and feeds us. Right from the ancient time water represented the very essence of life. Water has not only played a role in the history of countries, but also in religion, mythology, and art. Most religions believe that water cleanses the souls. Right from a unicellular to a multi-cellular organism water apart from oxygen is the most vital substance for their survival. Water is a very mysterious and amazing resource than we appreciate…… the era of easy water is over. Whether we all know it or not, we are on a new planet – a planet hit by recession of resources and a resource shock world, a sort that humanity has never experienced before. Water – either too much or too little – has a tendency to make headlines. 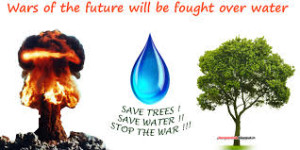 A natural resource like water which was once available in abundance has now become scare. We may happily say that more than 70.9% of our earth is covered with water and every country has so many rivers and water bodies then how can we face water scarcity? But the truth is ugly. Though we have so many rivers, lakes, seas and oceans, the truth is that 80% of the water cannot be use… thanks to we humans. We call ourselves educated and civilized, still we dump all our toxic and harmful waste into our water bodies, pollute them, brutally kill innumerable living organisms and destroy our aquatic ecosystem. Sea water cannot be used directly because of its high salt content. 96.5% of the earth’s water is salty and only 2.5% is freshwater, most of which is locked up in the glaciers. As the demand for water will increase in the near future with the world’s population to reach a whooping number of 8 billion, the risk of ‘water conflict’ and ‘water shortage’ will become more and more of an issue. Water has already become the fuel of certain conflicts in many region of the World… India and Pakistan or Karnataka and Andhra Pradesh to name a few.

Water is not evenly divided across the world, some places have loads while others have very little. Water is taken for granted as the air we breathe. We have now reached a limit where the water trajectory can no longer continue. We now have to find alternate way to use the existing water in a futher productive manner than we did before. The world is divided into water haves and water have-nots. Pakistan, Egypt, China are a few countries facing grave water issues in the 21st century.

Every era has been shaped by its response to the great water challenge of its time. And so it is unfolding- on an epic scale today. Emerging is an impending global crisis of water scarcity which is a defining fulcrum between the human civilization and the world politics. For the first time in the history of mankind, human’s unquenchable thirst, technological advancements, and population bomb has outstripped the availability of fresh and clean water for utilization.

The groundwater of most of the heavily populated parts is dangerously depleted by misuse and population explosion. Tons of garbage is dumped in rivers, lakes and seas. A country like India whoes rivers are worshipped are stuffed with harmful and poisonous wastes. “Yamuna is not a drain” and our rivers and lakes are not garbage bins.. people need to understand this. Just as oil conflicts were central to the 20th century, the struggle over fresh water will be brought into limelight in the 21st century.

It is very shocking to know that 65% of humanity lacks the access to clean freshwater for cooking and drinking purposes and 40% to adequate sanitation. Both the East and the West face a serious water shortage. What would happen to a water-distressed, terrorist-besieged, over-populated, nuclear-armed and politically unstable Pakistan when its single lifeline- the river Indus losses 1/3 of its appearance due to melting glacier.

Due to the growing press on natural resources and with the high numbers of international and inter-state watercources shared between countries and states, water will undoubtedly cause a great tension between the countries. Water continues to remain a great security concern for many countries and has often been used as a weapon in conflicts.

It is very obvious that if the present situation continues in the future than water would be costiler than diamonds, gold and other precious stones. The rich can afford to buy water at any price, but what about the poor? Does this mean than all the poor people of the world should die?
There are some facts that would blow our minds-
 Over 1.5 billion people do not have access to clean, safe water.
 Almost 4 million people die each year from water related diseases.
 It takes over 11,000 litres of water to produce a pound of coffee.
 Half the world’s schools do not have access to clean water, nor adequate sanitation.
 It takes about 300 litres of water to make the paper for just one Sunday newspaper.
 443 million school days are lost each year due to water related illness.
 On average, women in Africa and Asia have to walk 3.7 miles to collect water.
 It takes up to 5000 litres of water to produce 1kg of rice.
 90% of wastewater in developing countries is discharged into rivers or streams without any treatment.
 About half the world’s hospital beds are occupied by someone with a water related illness.

 A five minute shower uses more water than a person living in a developing world slum will use in a whole day.
Now it is on us if we too want to be among the above categories we could continue to waste water, have long showers, leave our taps open. Small steps taken from our side can make a lot of difference. ” A drop of water is worth more than a sack of gold to a thirsty man” 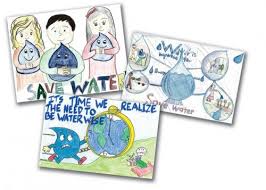 Though 70% of globe and maps are covered with water, what percent of it can be used? Though we have made many technological advancements in the field of science how many discoveries or inventions or techniques are actually used in treatment of water? The time is not far when there will be a wave of unrest, rebellion, competition and conflict- all for WATER.
John. F Kennedy rightly said-
“Anyone who can solve the problems of water will be worthy of two Nobel prizes – one for peace and one for science.”