The term ‘acid rain’ can refer to any form of wet or dry precipitation that contains unusually high and thus dangerous amounts of acids such as sulfuric and nitric acids. It is generally formed because the large amounts of such substances present in the atmosphere – a little due to natural sources like volcanoes but […]

The term ‘acid rain’ can refer to any form of wet or dry precipitation that contains unusually high and thus dangerous amounts of acids such as sulfuric and nitric acids. It is generally formed because the large amounts of such substances present in the atmosphere – a little due to natural sources like volcanoes but mostly due to fossil fuel combustion –  tend to react or combine with the rain, fog, snow or other form of precipitation and upon reaching the surface of the Earth can have various adverse effects such as damaging our architecture, messing up the carefully balanced natural biology of the soil or, most importantly, damaging several aquatic ecosystems by increasing their level of acidity. Awareness about acid deposition was really only created in the 1960s and the term “acid rain” was actually coined only in 1972, even though the phenomenon had been discovered all the way back in 1852 by Robert Angus Smith, a Scottish chemist.

The acids can be deposited in dry or wet form. In areas where the weather is wet, it occurs in the form or rain, snow or fog, whereas in areas with dry weather, the acid particles get integrated into the dust or smoke and fall to the ground in this guise. About half of the acidity in the atmosphere comes back to the Earth’s surface through dry deposition. They collect on the exteriors of buildings, cars, trees, etc. and later get mixed with falling rainwater to change into runoff which is highly acidic. Either kind of acid deposition results in similarly adverse effects on the environment.

One of the most harmful consequences of the existence of acidic compounds in any type of precipitation is the damage caused to lakes, rivers, wetlands, streams, and other water bodies. Introduction of such chemicals into these aquatic ecosystems as runoff or directly from the sky results in ocean acidification – just like emission of carbon dioxide into the ocean does –  and an increased acidity or toxicity, which species such as crayfish, clam fish and other aquatic animals present in that water body may or may not be able to tolerate. And in larger interconnected ecosystems, anything that impacts even the smallest species can impact the ecological balance of the entire system. In the United States, 75% of the acidic lakes and 50% of the acidic streams have already been affected by acid rain. The table below shows the levels of pH that various species can tolerate. A lower pH level indicates a higher level of acidity. Beyond a pH of 5, most eggs do not hatch and adult fish can die.

Aquatic systems are the most obviously affected by acid rain. Forests, too, can be damaged due to acid deposition. The increasing acidity of the soil permits aluminum, which is toxic to plant roots, to enter its solution form. Soil which lacks limestone, marble or other acid neutralizing components is much more susceptible to the damages caused by acid rain. Examples of areas that have already been impacted by the long term effects of acid deposition on soil include s much of the north-eastern United States where the soil contains granite, which has no neutralizing effect on acid rainwater. Quartzite is another such component. Trees in forests require healthy soil to grow, but acid rain dissolves metals that are generally bound to the soil and releases poisonous metals such as mercury, cadmium and aluminum. Even if these do not directly harm the tree roots, acid rain, as it moves through the soil, steals all the nutrients that are essential for plant growth; areas where acid rain is common may see reduced growth rates or even death of their vegetation. Microorganisms which play an important role in releasing nutrients from decaying vegetative matter are also reduced in number, and if the plants do not die from any of these effects, their immune systems will at least get weaker so as to make them more susceptible to infections.

Although swimming or walking in acid rain is just as safe as doing the same in clean water, the sulfur dioxide and nitrogen oxides contained in acid rain form fine nitrate and sulfate particles in the atmosphere which have been proven to cause illness when inhaled by humans. Thus, even though acid rain’s effect on humans is not direct, an increased number of the aforementioned sulfate and nitrate particles in the air have been associated with elevated rates of premature death from heart and lung diseases.

Acid rain has also brought some damage on monuments globally. Most noticeably, it is causing a tarnishing of the milky white colour of the marble of the Taj Mahal, India’s pride, by combining with the calcium carbonate in its structure. The particles in acid rain have also caused pock marks in buildings and have in fact resulted in a collapse of some parts of monuments such as some pieces of the Acropolis of Athens in Greece.

To prevent the general effects of acid rain, energy producers are being made to install scrubbers which will trap pollutants before they can be released into the atmosphere and cars are being fitted with catalytic converters. In an attempt to prevent more health concerns, Clean Air Acts have also been passed by many countries. Alternative energy sources are also gaining more and more prominence. 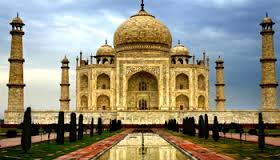