The setup of the Earth that is formed to help sustain human has been rendered so much that it is now not only a matter of concern but also has now turned into a subject of anxiety of survival. The environment is not just confined to nature. It also includes social and economic activity, which […]

The setup of the Earth that is formed to help sustain human has been rendered so much that it is now not only a matter of concern but also has now turned into a subject of anxiety of survival. The environment is not just confined to nature. It also includes social and economic activity, which altogether call for the preservation of our environment.

The act of enjoying rains in the first shower of the season is amazingly wonderful. But I’m afraid about the circumstances in the future uf the same trend continues. The rain in metro cities which bring with itself the oxides of sulphur and nitrogen, results in skin cancer. It is unfortunte that instead of finding a solution to the problem, we prefer to ignore it.

Acid rain is a form of precipitation that is unusually acidic having (pH<5.6), meaning that it contains increaesed levels of hydrogen ions (low pH). Acid rain is caused by emissions of Sulphur Dioxide and Nitrogen Dioxide, which combine with the water molecules in the air to produce acidic water. It has very harmful harmful effects on plants, aquatic animals and infrastructure.

The diagram clearly shows how the smoke from industries is hugely responsible for acid rain.

Acidic deposition occurs in two ways: wet and dry. Wet deposition is any form of precipitation that removes acids from the atmosphere and deposits them on the Earth’s surface. Dry deposition polluting particles and gases stick to the ground via dust and smoke in the absence of precipitation. This form of deposition is dangerous however because precipitation can eventually wash pollutants into streams, lakes, and rivers. Today, acid deposition is present in the northeastern United States, southeastern Canada, and much of Europe including portions of Sweden, Norway, and Germany. In addition, parts of South Asia, South Africa, Sri Lanka, and Southern India are in danger of being impacted by acid deposition in the future.

The root cause of acid rain is the human interference with the environment by means of electricity generation, industrial activities and motor vehicles. All of these activities result in the production of oxides of sulphur and nitrogen in the atmosphere, which then come down to the earth in the form of acid rains. Acid rain also occur via natural sources like volcanic eruptions which produce a huge amount of sulphur oxides.

Acid rain does not directly effect human health.The acid in the rainwater is too dilute to have direct adverse effects. Increased amount of these particulate matter do contribute to heart and lung problems including asthma and bronchitis. Acid rain has many ecological affects but the damage done to lakes and aquatic life is far greater. Acid rain makes water bodies acidic and causes them to absorb the aluminum that makes its way from soil into lakes and streams. This combination makes waters toxic to the fishes and other aquatic animals. As a result, the whole ecosystem gets disturbed.

Acid rain also damages forests, especially those at higher elevations. It robs the soil of essential nutrients and releases aluminum in the soil, which does not allow the roots to take up water. Finally, acid rain also has an impact on architecture and art because it corrodes the valuable artforms. It is the increased concentration of acid rains that has resulted in the yellowing of Taj Mahal. Acid deposition can also corrode modern buildings, cars, railroad tracks, airplanes, steel bridges, and pipes above and below ground. Every year a huge amount of capital is spent to make up for the damage being done by acids on bridge, roads etc.

The only way to fight acid rain is by limiting the release of the pollutants that cause it. It can be done by burning fewer fossil fuels, which ultimately takes us to the use of renewable energies to meet our purposes. Individuals can also help prevent acid rain by conserving energy. Vehicles are also major emitters of pollutants, which can be used by using public transportation, cycling or simply walking wherever possible. 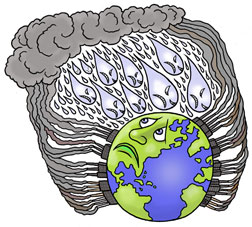 The cartoon beautifully brings out the anxiety of the environmentalists towards the threat.

A number of international treaties on the long range transport of atmospheric pollutants have been agreed for example, Sulphur Emission Reduction Protocol under the Convention on Long-Range Trans-boundary Air Pollution. Canada and the US signed the Air Quality Agreement in 1991. Many governments have tried to curb emissions by cleaning up industry smokestacks and promoting alternative fuel sources. These efforts have met with mixed results. But even if acid rain could be stopped today, it would still take many years for its harmful effects to disappear. Today is the day, my friend. Today is the day to wake up and stop this. Gone are the days when we’d write about environmental degradation. Let’s make it happen. Let us change, for a better environment, for a better life. Rains are a beautiful gift from nature to the living creatures. Let’s not spoil it. Let’s keep it pure and unpolluted.