Coastal areas all around the world are different, but they have one sight in common. No, not the sea. Okay, maybe two sights then… The sea, and mangroves. Yes mangroves, something we mumbaikars are very familiar with, if only to stay far away from them. We associate them with garbage, awful smells, and a waste […]

Coastal areas all around the world are different, but they have one sight in common. No, not the sea. Okay, maybe two sights then… The sea, and mangroves.

Yes mangroves, something we mumbaikars are very familiar with, if only to stay far away from them. We associate them with garbage, awful smells, and a waste of space. In this we display our true ignorance. 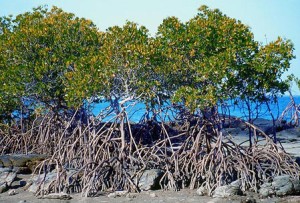 Mangroves can be beautiful too, not filthy like the ones we’re used to 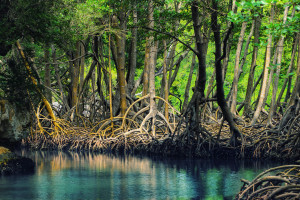 Look how scenic this looks, Mumbai mangroves could be like this too

Mangroves are an essential part of coastlines. More so than we realize. Some of us have enough awareness to know that mangroves act as a barrier between the sea and human settlements. This is true, but it’s only touching the surface of the benefits of retaining mangroves, which some very cunning builders would rather have gone. So how can a bunch of smelly trees be good for us? Well, let’s take a look.

Let’s see the first reason I mentioned – mangroves act as a barrier. The roots of the trees that grow in a mangrove are dense and hold onto the soil, so the sea isn’t able to erode it and sweep it away. Normally, the sea eats away at the coastline slowly but surely, and with the rising sea levels due to global warming, this phenomenon has become all the more serious. But areas with mangroves see far less erosion. In fact, mangroves act as a catalyst to reclaiming land.

Moving onto our next reason; if mangroves didn’t line the coast, the sediment from the coast would flow into the sea and bury marine vegetation, leaving the ocean unfit to live in. It protects coral reefs that rest near the shore too.

But the necessity of mangroves to marine life doesn’t stop there. Mangroves are also a breeding ground for many marine species like crabs, shrimp, mollusks and fish such as the coral reef fish. Studies have shown that the numbers of certain fish species are as much as 25 times more than the number present in areas without mangroves! This is a staggering amount, and highlights the importance of mangroves in a time when the population of fish in the sea is seeing a massive decline.

Moving away from the marine population, let’s look at the trees. At first glance they seem to be nothing worth our attention. They simply have long thin roots emerging out of pools of saltwater, and have dark, waxy leaves. However, these very same trees have the potential to serve a number of functions for us. In coastal areas like the Gulf of Kutch, mangroves substitute pastures as sources of fodder.

Mangrove wood is also resistant to insects and rot. These qualities make it excellent for construction and furniture. If this is harvested sensible, it can lead to a profitable product, without destroying the entire forest. The trees also have medicinal properties that are invaluable to indigenous communities, and can also be harvested for wood chip, pulp, and charcoal production. These mean the trees must be cut down, but if they are done in a moderate rate, and appropriately, then it doesn’t have to mean destruction of the mangrove or damage to the ecosystem.

Just to emphasize the value of these trees, let’s take a look at all the different services and material they provide:

Mangroves, as you can see, provide a lot of services to humans and nature alike. They are also beneficial in economic terms to us. In the Sundarbans mangrove alone 111 tons of honey are gathered annually!! If that doesn’t stun you then try this: according to a report by the WWF, the goods and services provided by mangroves are conservatively estimated to be worth US$186 million each year!!! This includes the fish, shrimp, and other such businesses that are dependent on mangroves. It also includes tourism, because mangroves are generally located next to tourist attractions such as sandy beaches or coral reefs.

So do you still think it’s worth chopping them down? If you still do, then how about this: mangroves absorb almost eight times more carbon dioxide from the atmosphere than any other ecosystem. They could also be a gene bank for the future, when coastal areas will be flooded, and it may be essential for salt-resistant species of crops.

“But they smell!”, you say? That is not the mangroves fault. Blame the people around your area for using it as a local shitpot and dumping ground. This is an illegal tactic to choke the trees and upset the salinity of the water, so that the land can be reclaimed and built upon once the trees are destroyed. So if you see dumping occurring, gather a body of residents and take this issue to the authorities. In 2005, the Bombay High Court ruled to prevent any further destruction of the city’s mangroves. It cited India’s Forest Conservation Act of 1980 as well as the Coastal Regulation Zone Notification of 1991.

Under the FCA, the use of forest land for non-forest purposes is prohibited without the approval of the central government. With the CRZ Notification, mangroves are protected because they only grow along the coast and are ecologically sensitive. Now that you know this, you can use it to your advantage. 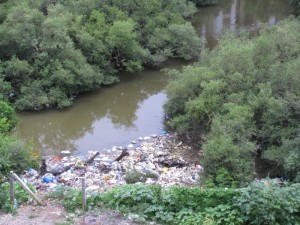 garbage being thrown in Mumbai’s mangroves. This is the reason they smell 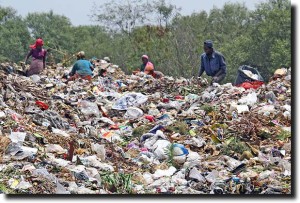 If you truly want to help, you can also get in touch with various NGOs that are working to protect mangroves from destruction. Mangrove society of India (Mumbai Chapter) and Vanashakti are 2 such NGOs that you can contact.

If mangroves weren’t there to protect the Mumbai coastline, our space constraint problem will get even worse in the future. Raise your voice to protect our green neighbours.