Almost every single person on this planet will know that one of the most persistent problems that has never been satisfactorily quelled is that of the depletion of fossil fuels. Naturally I am not including in this list anyone who has been spending the last fifty years in hiding in a bunker deep under the […]

Almost every single person on this planet will know that one of the most persistent problems that has never been satisfactorily quelled is that of the depletion of fossil fuels. Naturally I am not including in this list anyone who has been spending the last fifty years in hiding in a bunker deep under the Earth, in fear of a nuclear holocaust or something similar. Getting serious, though the problem has never been solved, its ramifications have been delayed. This problem has been prevalent in the discussions of leaders all over the world for over 50 years now. But we are nowhere close to finding a complete solution that would address our population’s fuel needs.

It is possible that those in power with regard to this issue are of the opinion that a solution would eventually come up. This is because it was initially predicted from the data at the time that the fossil fuels would not last too long into the twenty first century. But those who came up with these predictions did not take into account the exponential growth that all fuel dependent technology was on the cusp of encountering. In 1950, no one would have imagined that a car that gives 70-80 miles to the gallon was possible. Neither would they have envisaged two-wheelers that worked even better in terms of mileage. At the time, twenty-five miles per gallon was considered great. Additionally, use of other sources of energy like solar, wind, nuclear, etc. eased the pressure on the amount of fuels required to produce electricity. All this contributed to saving more fuel than was thought possible half a century ago. This resulted in the latest predictions giving us around a half a century more till the complete exhaustion of fossil fuels.

But it is ridiculously obvious that this kind of a solution will eventually collapse. We are only postponing the inevitable with this solution. Thus, it is imperative that we do one of the two things- find ways to extract maximum power from the existing alternative sources of energy or find new sources of fuels. What most people do not realise is that there is also the secret third option. Most people, even those well-educated, have not heard about a concept called biofuels.

This is a potential source of fuels, a renewable one at that, which has been around for nearly a century. It involves the use of bio mass, i.e. plant products, or anything that has used the sunlight as a source to produce food as a source of fuel. It has been used with great effect in many countries, and it is probably a matter of time before it is adopted all over the world.

These biofuels are classified into four types, delineating how they have evolved over the years.

First Generation: The fuels under this category are those that have been produced by using fermentation. Bioethanol is produced using this technique, while biodiesel is produced by abstracting oils from food crops. These are produced directly from food crops. But there were problems associated with this generation of biofuels. These release more carbon dioxide while burning than what the food crops consume when they grow. Moreover, they also consume food crops which could otherwise have been used to feed the millions of world’s poor, resulting in a problem of ‘food vs fuel’. Some attribute the rising food prices in the world to the excessive use of this generation of biofuels. Habitable land is lost to crops in this method as well.

Second Generation: These are produced using organic waste, food crop waste, specific crops that are grown for this purpose and wood. They are more cost effective when compared to the first generation and are designed to be cost competitive to the fossil fuels. They also do not emit as much carbon dioxide as the first generation and solve the problem of ‘food vs fuel’. 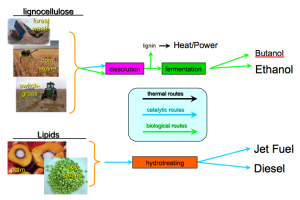 Third Generation: This generation involves using specially engineered energy crops such as algae as its energy source. Algae are grown in man-made ponds which have the potential to produce more energy per unit area than conventional food crops. Another big advantage about this type of fuels is that they do not use of cultivable or habitable land, thus freeing these up for better uses. Finally, the algal growth can also be done with waste water, and hence does not create any further strain on the water sources of the world. 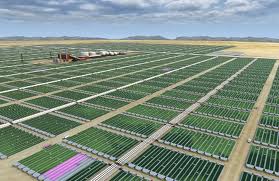 Fourth Generation: The fuels of this generation perform the additional activity of capturing and storing carbon dioxide to producing sustainable energy. The feedstock used for these fuels would have absorbed carbon dioxide while growing. These are converted into fuel using processes similar to that of the second generation, but differ in that these use a technique called oxy fuel combustion to capture all the carbon dioxide released. This is then geo-sequestered, and stored in saline aquifers or old oil fields. This method of production captures more carbon dioxide than it releases. 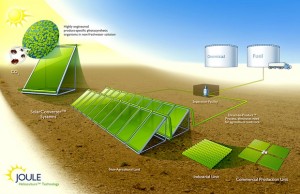 With the rising concern of the people regarding pollution, global warming and food production, it makes perfect sense to tread a path that has the potential to solve all three in one go. Use of third or fourth generation biofuels is not only cost effective vis-à-vis fossil fuels, but also paves the way for a clean and green earth.