So, when we talk about being environment-conscious and all, we go all “No man, it’s not for me! Besides, I’m not rich enough to buy cotton worth three thousand bucks. I’d rather shop at Causeway!” But the point is, that is a notion that misleads us. How can becoming one with the earth that bears […]

So, when we talk about being environment-conscious and all, we go all “No man, it’s not for me! Besides, I’m not rich enough to buy cotton worth three thousand bucks. I’d rather shop at Causeway!” But the point is, that is a notion that misleads us. How can becoming one with the earth that bears our weight be something just for the classes and not the masses? Sure, there ARE some practices that we can do to help the planet redeem itself, which may be quite steep and something we may not want to spend precious pocket money on. Organic food and high-class organic clothing which is usually shown off as a way to be concerned about the planet is surely one way, however, these are on a much greater level. Apart from the normal ways to go green that is drilled into our heads from the fifth grade, there are plenty of other such things, which do not require us to be electric engineers whipping up solar panels or the government of India to go around install windmills! In fact, rather than being too costly, the day-to-day efforts to go green, if made, are actually a way to reduce expenditure! Going green is simple yet classy and totally worth the short extra mile we have to go for it!

For starters, instead of paying to go green, start doing things that will pay you for going green! It may sound like an obvious thing, but instead of installing hundreds of bucks’ worth of appliances that use lesser energy and power, try to use them in a way that they save it anyway. Don’t leave the phone charger in the socket even if it is off, since it still draws power. Just pull it out instead. Switch off the lights and fans when you leave the room, instead of buying expensive power-saving bulbs and keeping them on throughout. Of course, if you can do both, there’s nothing that could be better! Also, there are many “clean, green and healthy” organic products that are available for hair and skin care in the markets- in fact, labeling them as organic and natural is a marketing strategy in itself. No doubt, they may deliver what they promise. But the point is, at what cost? Literally! These products, since they are sought after so rigorously now, are quite expensive as well. Instead of using these, we can make our own packs and scrubs at home! Almonds, honey, yoghurt, lemon, turmeric… they are all items you will surely find in the kitchen, not to mention you will probably be spending one-tenth the amount. Also, what gets more natural than this?

The best thing you can do to go green AND cheap, is to buy used or recycled things if it is feasible, depending on the commodity. Of course, this doesn’t mean wear somebody else’s used clothes and stuff. But if you do find good use for someone else’s things that they were going to dump anyway, especially for one time use, what could get better? They would give it to you at a quarter of the price and you would save the landfills from the already enormous burden they are carrying, even if it is to a small extent! Another group of items that are marketed based on their “organic” label, are food-related things. Of course, they may be totally preservative free, but buying things directly from the farmer’s market are almost equally as safe and healthy, not to mention minus the big bucks. Also, since they are meant to be consumed fresh anyway, they are understood not to have preservatives and artificial colors and heavy packaging. You can buy milk that is wrapped in four layers of packaging to prevent decay and kept it safe, or you can buy fresh milk that is cheaper and probably equally safe and in fact, fresher. Another golden tip to keep in mind is- don’t waste food. Take small potions, since you can always take more if required. It helps you save money as well, since you end up knowing the exact amount you need, hence you buy accordingly as well. 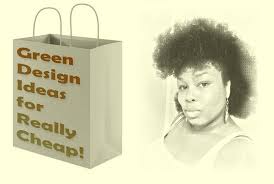 Try to buy food that is not very highly packaged, since it will prevent the extra usage of paper, hence saving the trees and also reduce the truckload amounts of garbage that we produce on a weekly basis. Another rule is- repair if it breaks. You don’t need to chuck the goods just because of a small scratch- not only will it be steeper, but also increase the level your garbage-bin is filled up to. Try to segregate the kitchen waste like vegetable peels and fruit residues, putting them in your garden instead of allowing them to rot in the futile pile of junk. You will save up on buying fertilizers, since the fruit and vegetable peels will naturally enrich the soil. It’s a concept called waste to energy, which is coming up on very big levels in countries all over the world in different ways!

Moreover, the point is there are a lot of baby steps that can be taken to make a difference- the question is not CAN we… the questions is, WILL we?