You are here: Home \ DIY Green \ Environment \ Cleaning up the planet with Bioremediation
DIY Green
0

Cleaning up the planet with Bioremediation

The rate at which we are polluting the environment or rather destroying it is quite alarming. From oil spills in the oceans to dumping of radioactive waste on fertile lands, we are polluting the planet we live, in every single possible way. Though we are well aware that such activities are only going to destroy […]

The rate at which we are polluting the environment or rather destroying it is quite alarming. From oil spills in the oceans to dumping of radioactive waste on fertile lands, we are polluting the planet we live, in every single possible way. Though we are well aware that such activities are only going to destroy our race sooner, we are just quite hopeless when it comes to cleaning the mess we made. So the only way we resort to is stove away all the bad stuff in a place where we can’t see, and hope that at some point of time the danger will pass away. But the truth is, matters just get worse due to this. For example, the instant we started producing energy from the nuclear reactors, the problem of nuclear waste disposal had already become a serious concern.

So as good humans as we are, we sealed them in apparently air tight containers and dumped the waste in the ocean, hoping the giant fishes would take care of them. But as expected, only the oceans got polluted and we lost hundreds of kilometers of fishing region due to radioactive pollution. And yet we continue to dump waste in the ocean and other geographical regions such as deserts and mountains. All these activities are just slowly eating up the very little space that we have to survive. So are we all doomed? Is there no way we can produce energy and take care of waste disposal without causing harm to environment? Well apparently, there does seem to be a way, and the answers don’t lie far out in the space but everywhere around us. Yes, we are talking about the microorganisms that we breathe, kill and eat every day. They are the only viable solution for our entire waste disposal problem.

The simple technique of Bioremediation

Often we hear the term irreversible damage when reading major articles on environmental pollution. Though most of the time it is true, irreversible is only because we lack the capability to repair the damage done to the environment, but in the world of microorganisms, there is apparently nothing called as irreversible. Whether it may be an oil spill, or a highly radioactive outburst or even a nerve gas leak, for these tiny little critters its nothing but just another day at office. Really that’s how stubborn and effective microorganisms are in holding on to their territory. And they just don’t stay there; they actually reverse the process and make their surrounding suitable for their existence as well, which fortunately is suitable for us too. Though it’s a slow process, one can be pretty sure that no matter how harmful, the damage has been done; the microorganisms will be there to save the day. And the process of introducing such microorganisms to such sensitive locations and speeding up the process is called as bioremediation. 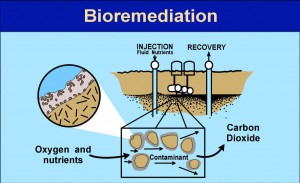 The simple process of bioremediation

Bioremediation can be classified as either in situ or ex situ. The in situ process, as the name suggests, involves introducing of the bio organisms to the site and accelerating the restoration process. Whereas the ex situ process involves taking the contaminated materials to the site where the microorganisms are given the prefect conditions and time to do their job. A perfect example of in situ bioremediation is the use of the mycelia fungi and other bacterium to break down fuel oil spills in oceans and land. These microorganisms breakdown the long polycyclic hydrocarbon aromatic chains into nontoxic compounds that can be processed by other organisms just like any other compound.

But of late, the ex situ kind of bioremediation is getting quite popular, where the highly contaminated material such as toxic wastes, sludge, highly reactive chemical wastes and plastics found in landfills are being effectively decontaminated. Scientist have now genetically engineered bacteria that can dissolve even highly radioactive compounds such as toluene, ionic mercury and other heavy metals from noxious radioactive wastes. So, sure enough in the not-so-distant future, we will have completely eradicated the nuclear waste disposal problem.

How is bioremediation being utilized?

Though at present, bioremediation is being utilized mostly by just oil companies to clean up the spills and by nuclear research laboratories, bioremediation is actually finding large scale application in urban living space as well. For instance, in the Riau Province of Indonesia, bioremediation was successfully utilized to restore the inland river polluted by dumping of toxic waste by the nearby oil companies. Also bioremediation is used in a more natural way, where fungi are introduced into landfills where they decompose the plastic waste, which would usually take decades to decompose completely. So essentially, bioremediation can be utilized at almost every stage of waste disposal, yet at present it is not being seen as a mainstream solution by state departments for everyday waste disposal. The reason state departments are reluctant to use bioremediation techniques in a full-fledged manner is due to the cost involved and the dangers of affecting the survival of other organisms due to mutation. But as of now, no such cases have been reported and it’s safe to say, that bioremediation is a completely safe solution. Now the only question, when will we be ready to utilize it completely?