According to Our Common Future (Brundtland Report) sustainable development can be defined as:

“Sustainable development is development that meets the needs of the present without compromising the ability of future generations to meet their own needs. It contains within it two key concepts:

Sustainable Development has found itself in global debates especially after the 1992 Rio Earth Summit and the formulation of Agenda 21 which was a definitive plan of action for various countries to take the concept forward.

Sustainable development, rather than a vision, proposes a way of thinking of issues. It is not prescriptive of what the world would look like. The definition itself speaks of a comprehensiveness and synergy that is called for when it comes to the sustainable development of the Earth, rather than a particular country. And when you think of the world as a system over time, you start to realize that the decisions our grandparents made about how to farm the land continue to affect agricultural practice today; and the economic policies we endorse today will have an impact on urban poverty when our children are adults. Hence, the renewed focus on the repercussions on future generations.

According to the World Bank, the needs of the future depends on how well we balance social, economic, and environmental objectives–or needs–when making decisions today. Additionally, issues of climate change, natural resource depletion, agricultural sustainability, food scarcity, and urban development also fall under its ambit.

And indeed, this also reflects on the competing interests that these objectives can elicit. For example, a nuclear plant may meet industrial energy demands in a much more efficient way in terms of cutting down emissions potentially; however, the plant also poses a looming danger environmentally for the population residing around it. Thus, sustainable development is a balancing act and certainly very dynamic as effects of upgradation of the economic sector overspills to the other (social or environmental) in the integrated world that we live in. Piecemeal solutions tend to focus on short-term benefits without monitoring long-term results. Solutions to one problem can make another problem worse. Creating affordable housing is a good thing, but when that housing is built in areas far from workplaces, the result is increased traffic and the pollution that comes with it. Thus, the comprehensiveness of development is truly captured in the synergy between the economic, social and environmental objectives as depicted in the Venn diagram. 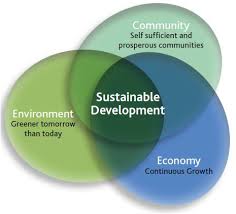 Economics here plays a pivotal role as it can be seen as the linchpin connecting the social and environmental aspects of development, as it principally concerns itself with allocation of a state’s scarce resources. The investment in social causes and environmentally conscious processes is a constant trade off vis-à-vis rapid growth propelling activities for any government. And, life within scarcity is a reality for developed and developing countries alike- only the form of scarcity varies.

The concept of sustainable development negates the question of “Either…or” as it envisages inter-generational benefits with special importance given to the vulnerable sections. It is not a choice between longevity and development; rather it is long term development. Thus, it shifts the focus away from the race for double digit growth rates as an end to a means to a better and sustainable end. While conventional economic development leads to the elimination of several traditional occupations, the process of sustainable development, guided by the need to protect and conserve the environment, leads to the creation of new jobs and of opportunities for the reorientation of traditional skills to new occupations.

In a sense, sustainable development is not solely about environment (as commonly mistaken) but its integration with the social and economic objectives as it is not an independent concept on its own but deeply enmeshed and localized in each country. Thus, this also offers the flexibility of interpretation of the concept of sustainable development itself at each country level. For instance, impacts of climate change vary across countries and even within a country. Within a country like India, we see droughts, floods, hurricanes all at once and thus, we require region-specific interpretations and solutions.

Surprisingly, currently there is no single, universally accepted definition or assessment metrics for sustainable development. There are no internationally agreed sustainable development indicators that would help monitor progress.  However over the years many measures like the voluntary CSD Indicators, UNDP’s Human Development Index, OECD‘s Your Better Life Index, Ecological Footprint and Sustainable Society Indices have provided a quasi-benchmarking method.

However, with increasing sensitization, technological advances and greater coordination through global forums, there is greater hope of an integrated idea of sustainable development, where everyone envisages themselves as an equal stakeholder. This shall result in reorientation of policies not just at the world stage but also within each country with each of their industrial, agricultural, services and social sector working in conjunction within a common framework.