Food and Agriculture Organisation of the United Nations defines food security is a situation that exists when all people at all times, have physical, economical and social access to safe and nutritious food that meets their dietary needs and food preferences for an active and healthy lifestyle. Environmental sustainability is also becoming an important concern […]

Food and Agriculture Organisation of the United Nations defines food security is a situation that exists when all people at all times, have physical, economical and social access to safe and nutritious food that meets their dietary needs and food preferences for an active and healthy lifestyle.

Environmental sustainability is also becoming an important concern for food security due to issues of climate change, environmental degradation and loss of quality of soil, water and majorly shortage of land. Activities in the food system impact the environment and the changing environment in turn also impacts our capacity to make enough food available to a growing number of people. These changes have led to a restriction in food production in some regions. On top of all this, an increased demand for food has raised concerns over the development and impacts of increased global food insecurity. 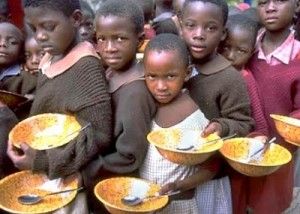 In 2009, UK’s chief scientist, Sir John Beddington, coined the term “the perfect storm” where in he stated that the demand for food and energy will increase by 50% by 2030 and demand for water will increase by 30% by 2030. This highlighted the challenge posed by human population rising through seven billion towards nine billion by the middle of the century. The rising cost of energy, limited availability of land, water, and fertiliser, and the ever growing challenge of global climate change all pose a huge question over the ability to ensure food security for all in the coming years.

These challenges call into question our capacity to produce enough food to feed the approximately one billion who currently do not have enough to eat, let alone what is potentially an additional two billion mouths to feed within the next 50 years. This problem is likely to be further exacerbated by economic changes which allow some people to eat more, and particularly to eat more meat than has traditionally been the case. Meat production is a major issue as well as it requires grain, water, energy and land to feed them and raise them – all resources that we are already running short of.

It’s important to understand that climate change isn’t causing just a wholesale rise in temperature or a wholesale drought or a wholesale wet. It’s causing volatility in climate and seasons. Crops are planted across the world, all round the year and over that 12 month period you could have absolute extremes of cold, of wet, of dry, all in the same year. So it is required for farmers to build in tolerance of bad weather. An apparently increasing frequency of extreme weather events are all leading to volatility in global food production. And such volatility can impact global food prices of key food crops!

In many countries of the world, people spend half of their income on food compared to around 10% or less in the US and the UK. This means that when there are spikes in food prices, such as in 2008 and 2011, which may be caused by a range of factors, including poor weather for food production, people who already spend a high proportion of their income on food may be pushed into food poverty. This is a problem which is not just restricted to the developing world.

Another complicating factor is that about half of the world’s population is now living in cities than in rural environments. This proportion is expected to get larger as much of the predicted increase in population will occur in urban communities. Most of these people will be unlikely to be able to produce their own food, placing still more pressure on the food system.

Modern agriculture with the help of science will most likely continue to deliver increasing quantities of food. However, there are several threats to this important component of increased food security. Modern agriculture which heavily relies on water from irrigation, good quality land, fertilisers cannot continue unabated as the very foundation of it is seemingly unsustainable.

Agriculture which is highly productive but depends on irrigation, pumping of groundwater to meet this need has led to decreasing ground water levels, often with catastrophic effects on natural vegetation. Punjab has witnessed this as due to excessive planting of paddy, the groundwater levels have receded majorly. In extreme cases, desertification is a major problem. Many food exporting countries are already water scarce, and it is therefore important to ensure that food production and distribution processes are as sustainable as possible.

Over-fertilisation is another problem. Consider Phosphorus. It is one of the key nutrients which promotes metabolism, which helps plant and crop growth and food production. But at the same time, as well as being vital to food security it actually plays a really key role in water security because when it leaks into water bodies, it leads to all sorts of ecological reactions causing eutrophication, which basically really undermines the quality of rivers and lakes. Thus the irony is that Phosphorus is beneficial in agriculture but when it leaks to water, it contributes to quite phenomenal problems with water quality, and we need to manage that.

We must work to reduce the environmental impacts of agriculture. Many hold the view that we have a food system that is at best dysfunctional. While we may be able to increase food availability to many via innovation and introduction of new technologies, we need to ensure that we also give attention to food issues in developing nations where food for most people is produced by small land-holding farmers who may have only very restricted access to resources of any kind. There is long way to go to ensure food security but we don’t have a lot of time. The years to come will be crucial for the international community, politicians, policy makers, big agri-businesses to adopt a more sustainable stance so we can feed the one billion hungry and the additional two billion till 2030.