Sports increase the spirit between nations, not only sports help to the economy or helps globalization but somewhere it affects the environment. Now you would think how any sport can affect our environment, while watching sports we may be hard core enthusiast but when it comes to environment we may not be that much interested. […]

Sports increase the spirit between nations, not only sports help to the economy or helps globalization but somewhere it affects the environment. Now you would think how any sport can affect our environment, while watching sports we may be hard core enthusiast but when it comes to environment we may not be that much interested. Have you ever thought that the stadiums in which games are played is not just a made up of two components sport persons and audience but when a game is organized in a stadium lot of factors are affected.

Stadiums during the sports series consume a lot of resources for instance, water, electricity, loads of waste is generated from the audiences. This creates an urgent need to manage the optimum utilization of resources and management of wastes. Frequent climate change has generated the warning to the countries all round the globe to take a step forward and make sports to go green!

There are many examples of the stadium company which has initial step, out of which is MetLife Stadium Company signed a Memorandum of Understanding (MOA) with the Environmental Protection Agency (EPA), pledging to become an environmental steward and implement carbon footprint reducing initiatives. While MetLife Stadium is more than twice the size as the original Giants Stadium in terms of square footage, there has been a reduction of energy use of around 30%, due to initiatives such as:

Not only some measures like usage of solar and wind energy would help but also recycling will assist in waste management. Tonnes of cans, tins and containers most of the recyclables are generated by fans which can be collected separately or mixed and recycled and used optimally. When we recycle, used materials are converted into new products, reducing pressure of the need to consume natural resources. Recycling helps to conserve important raw materials and protects natural habitat for the future.

These are very efficient options in front of various companies, Recycling is one of the best ways to have positive impact on the world, in which we live; it has given a way to brighter tomorrow.  Various companies and industries are following and implementing the process of recycle to improve their productivity and for conservation of natural resources as well as protecting earth from various environmental hazards

Many countries are taking step for making sport a little greener by making the audiences aware to the need of using efficient energy and help them to prove their motto of recycling recyclables  One baseball game can produce 760,000 bottles and cans that are discarded in the trash rather than recycled. One football stadium can produce about 100,750 tons of carbon dioxide per game.

The decision for national sports teams to promote green initiatives is an important step. Not only will it positively affect the environment while the teams are on the field, but it also has the potential to influence their millions of fans to be green off the field. Companies that focus on reducing energy consumption not only help the environment, but also reduce their costs in the form of lower energy bills.

Going green isn’t expensive – neither in terms of short-term financial output, such as for materials, nor for long-term benefits where environmentally sound practices inherent in green design result in lower energy and water bills, as well as other operating and maintenance costs.

Around a third of the worlds’ total carbon dioxide emissions produce 40% of the world’s total energy consumption. Green building reduces the environmental impact of building through sustainable design and construction, as well as energy- and resource-efficient materials. 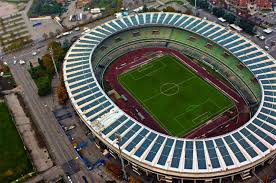 During any sport events in any of the stadium a lot of energy, fuel, electricity, pure water, etc are consumed which results in lot of waste. Though all the countries are taking step towards green living but all are not capable of handling, so there is a need which may arise in future to make every stadium more efficient and environment friendly. If every aspect of from sports to sort of any field tends to use more eco friendly ways of performing any work, will surely help mankind to have healthy environment. It may in the beginning hard for every country to build a green stadium but gradually in the coming decade all the developing and developed countries hopefully make a sport a green even! And being united not only enjoys the sport but also towards saving the world from global warming!