The meetings, the tables and the much stipulated agendas that point to a major cause: the global warming have just become mere discussions and are simply not leading to a change in the status quo. The high level talks in the most exotic of places in the world are not proving to be of much […]

The meetings, the tables and the much stipulated agendas that point to a major cause: the global warming have just become mere discussions and are simply not leading to a change in the status quo. The high level talks in the most exotic of places in the world are not proving to be of much use. The statements issued after these summits warn the globe but reveal less about how to eradicate the disastrous effects of global warming. 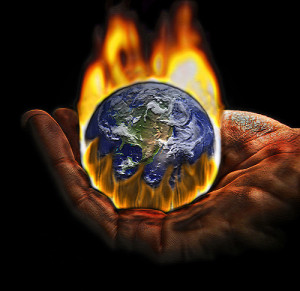 From the agendas in Kyoto to the dockets in Copenhagen, all of them may or may not have had a significant outcome but have revealed one thing for sure, i.e. the calamitous consequences of the rise in the level of green house gases. Now many of you may think about the topic being so tautological, that it’s not worth pondering on, but are we really thinking from our conscious? Are we really cogitating on our future? No we aren’t and that’s what is turning out to be the biggest mistake of us Homo sapiens which will have a huge impact in our consequent existence.

What is more shocking are the recent attempts made by some ‘big’ companies to hide the results of scientific experiments; which reveal the fatal repercussions of rise in the level of Methane and Carbon Dioxide specifically. We have been sent behind a veil, wherein we are being deemed as ignorant of the subtle changes happening to our environment.  Although, the speculation is not proven, the results of such hegemony are out there. We today seem to be caring less about the issue more than ever before.

I read it today in a leading national daily that Antarctica’s ice loss has doubled over the past few years. Isn’t this an alarm? Scientists suggest that only a metre’s increase in the ocean level world will submerge the coastal cities under water. Such has already started happening to the island of Maldives, which according to recent reports is slowly going below the surrounding waters.

Hereby, it would also be worthy enough to point out the fact that at the speed with which the global average temperature is increasing, it wouldn’t be much longer when there would be time, all of us would be compelled to shift to some other planet. At a much lighter note, a global company has already arranged a Mars mission that will become (according to the company) a possibility around the year 2024. What’s more to this is that they have selected a few Indians too for the same.

Such are the solutions we are opting for, to tackle this problem. But what if we go for more localised ones?  What is the mantra to curb whatever we have created, without making it a seeminglt herculean task? Well, here below is an attempt to suggest ways that might be useful in eradicating this growing problem. But, where do we start from? Isn’t a global issue needed to be tackled globally? Yes, this position is apt but in the case of global warming, since global solutions are in turn creating more hassles, it would be better to start at a more local level. Such was also told to me by Shreyak Mahajan (an Indian youth who embarked on a journey to the South Pole 2 months ago) when I interviewed him. ‘It is us who’ll have to bring the change at a local level, and such changes will amalgamate to create a bigger change globally.’

Charity begins at home, well so does going green. You can always cut the green house emissions from your home by curbing the hours of air conditioning system. Use CFLs instead of light bulbs. They’re more economical and will save energy, in turn will also give a better life than a normal light bulb. Check that all the switches are in an off position when you leave your home. Use public transport when you get out of your home, doing so will reduce the amount of cars on the road and would amount to less harmful gas emission.

To make our initiatives sound more pertinent, we can always form local level groups and carry out demonstrations that may jolt the authorities at some level and instigate them to take action. Lest we procrastinate, such a kind of enterprise can always help bring down pollution levels in a much wider range. An example could be that of the ‘team of 4’ which has started working to dispose of the non-looked after garbage on the roads of Bangalore.

But isn’t it a clichéd attempt to curb the problem?  We all know these solutions, what’s required is their implementation.  My endeavour here is not to preach you something but to sensitise you on the growing problem at hand. What we are making today is a disastrous future for us and a more portentous one for our generations to come. Thus in all whelm of events, now is the correct time to start doing something. To make this world a better place to live in. And to make it a safe haven for our future progenies. Yes, we will have to clear the Augean stables.