You are here: Home \ Environment \ HIPPO- A Threat to Biodiversity
Environment
0

HIPPO- A Threat to Biodiversity

While being an environmentalist, one has to take equal care of the fauna as one cares for the flora. While the plant species are very important for the existence of human beings, the role of animals in the eco-system can not be ignored. In recent years, killing of these animals is widely observed and has […]

While being an environmentalist, one has to take equal care of the fauna as one cares for the flora. While the plant species are very important for the existence of human beings, the role of animals in the eco-system can not be ignored. In recent years, killing of these animals is widely observed and has surfaced as major issues in many countries. Conservation biologists and scientists who try to stop endangered species from dying out, use the word ‘HIPPO’ to remember the different things that threaten animals and plants, because each letter stands for a different threat. Let’s have a look on it and try to observe how all these become a threat to these species.

Forests all over the world are being cut down and burned in the guise of development. Forests in the tropical areas are cleared to make room for farms. But tropical forest soil is very poor, and so farmers have to keep moving on and destroying more and more forests to grow their crops. Companies also cut down forests for their timber, or to make room for other plantations, in which the wild animals end up loosing their homes. Each year, 1% of the world’s tropical forests are destroyed. Does this not threaten you? Well, some hundred years and tropical forests will be vanished. And why wait for hundred more years, every cutting tree brings bad news for native plant and animal species. Wetlands- lakes, ponds, marshes, swamps and rivers are also very threatened habitats, credited to the pollution causing agents. 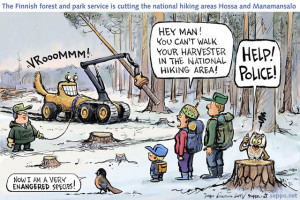 A brilliant cartoon describing the anxieties of the birds as their habitat gets destroyed.

Invasive or introduced pest species have caused many native animals and plants to become extinct across the world. Introduced species often have a very harmful effect on native species. For example, 24 rabbits were introduced to Australia in 1859 for hunting. Rabbits breed quickly, and, in an environment without any of their natural predators, their numbers increased so quickly that in less than a hundred years there were 600 million across the whole continent! The rabbits took over the resources and habitats of native species, like the bandicoot, which is now endangered.

Pollution contaminates the natural environment with harmful substances produced by human activities. An example of pollution is an oil spill. This happens when oil is released accidentally into the sea from a tanker, pipeline or refinery. The spill forms a thin layer of oil, called a slick, poisoning sea life, and damaging the fur and feathers of seabirds and mammals. Due to the contaminated atmosphere, most animals ran away in search of an appropriate place to live. With the construction and expansion of every new city, the pollution increases, so does the danger to these species.

The growth of the human population is the biggest threat to natural environments today. There are over 7 billion people in the world. Quite simply, there isn’t enough room for natural environments to coexist with all these people, and the land they need to provide them with food and shelter. As a result, in the race of survival of the fittest, animals and plants get crushed under the skyscrappers.

There is a huge demand of animal products like whale oil and whale meat, elephant ivory, and rhino and tiger trophies. Although all of these animals are now protected under various laws from hunting, illegal poaching still continues.

Other species are overharvested – they are used faster than they can be replaced – which is likely to lead to decline and extinction. Cod is now too rare to be caught in many areas off the coast of America and in the North Sea- and the situation is the same for many other types of fish. Plant species can also be easily overharvested- the Brazil nut tree might be in danger of extinction, because not enough of its nuts are being left in the rainforest to grow into new tree. 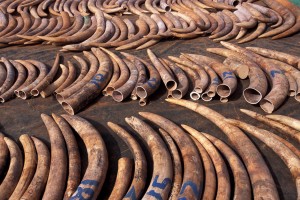 The huge demands of tusks and other animal products encourages poachers and hunters.

If we all do a little bit to help preserve natural resources, we will help prevent many more species of animals and plants becoming endangered. Museums are probably the only place we can find the remains of extinct animals but that day isn`t too far that our children will visit a museum to see a tiger instead of zoo or national parks. While today, the human race might boast about its existence in the race with the animal and plant species, it is sure that if the latter are extint, not much time will be left with the former. The two are strongly interdependent and should not be separated. Human existence will be nothing without the valuable plants and animals. They belong to the earth as much as we are, their existence is what gives us an identity. Cherish them. They are yours.