It is not until you go to rock concerts, coffee houses, railway stations, malls, parks, roads and well yes everywhere( except classrooms) that you realize this increasingly alarming problem of overpopulation. Let us face it unavailability of railway tickets, not enough seats in schools and colleges, no place for accommodating any more people, they are […]

It is not until you go to rock concerts, coffee houses, railway stations, malls, parks, roads and well yes everywhere( except classrooms) that you realize this increasingly alarming problem of overpopulation. Let us face it unavailability of railway tickets, not enough seats in schools and colleges, no place for accommodating any more people, they are not just a result of the inefficiency of the government. The government does not go around telling people to produce more and more kids. Further, this overpopulation is leading to many other problems, resulting in a fall in standard of living of the people. This is because no matter what we do, we have to concede to the fact that we have limited resources. The earth can but bear a limited amount of burden. The more it increases the worst our lives get. Although overpopulation is a problem that right now affects the entire world, however India seems to be at the tip of the cliff due to its blatant rise in population. While the rest of world seems to be working on this problem, in European developed countries the population is in fact decreasing, India continues to expand in its number of people. 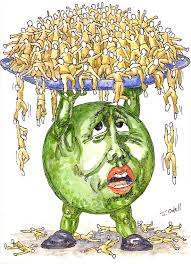 If we really go on to talk about the problems that overpopulation is causing, the list might be endless. Therefore, I’ll be focusing on the main and more dangerous problems in my article.

Resources continue to get scantier in our country. What was available for one individual a few years ago is now shared between two people, thus insufficient for both. Even the most basic resources such as food continues to be a privilege for many. Water remains a problem in our country. People are just a lot to meet the needs of everybody. It pains me to see how life struggles to survive in our country yet continues to increase. This lack of resources has also lead to problems like health issues, like mal nutrition and plenty lot of diseases. There is terrible harm coming to our population because of increasing population. We are risking lives of many by bringing in more

When I said that there is lack of resources, I meant every resource, even job availability, especially in India. Highly educated people with bachelors and master’s degree sit at home due to lack of jobs and problems leads to what we call brain drain. People prefer to go to foreign countries to settle down. This is extremely problematic because there is a huge waste of our resources which is anyways very less.

Unemployment further leads to poverty and poverty again leads to overpopulation. This happens because of lack of people who are poor tend to believe that more the number of working hands, the better it is. However, they don’t realize that they will also have more mouths to feed. This prevents small children to go to school and the problem of illiteracy remains stagnant. Thus, until we stop this rapid rise in population, we can’t dream of coming out of this vicious cycle.

Now as population continues to increase, more and forest areas are cleared, for both accommodation and wood for fuel. This increased deforestation has led to a terrible rise in the air pollution. What we myopic humans don’t realize is that everything we do gets back at us. This air pollution leads to massive increase in respiratory diseases, asthma, chronic obstructive pulmonary disease, cardiovascular disease and cancer of the lung. Beside the untimely death of many, this air pollution also affects our national heritage leaving monuments like Taj mahal turning ivory.

It is amazing how we Indians believe that we have a right on all natural resources and are thus free to exploit them as much as we want. Water pollution is yet another problem in the pool of problems that population causes. We throw rubbish in water bodies as if that is what they are there for. We take bath in rivers and oceans in the name of cleansing our sins but don’t realize that ever our body wastes are getting cleansed into the river. We ourselves stab us by polluting these water bodies and thus being the cause of spread of many deadly diseases. And the more our population increases, the more problems like these increase. 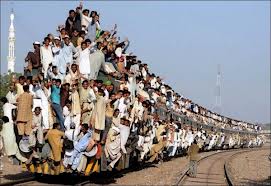 So having talked about the effects of heavy population growth, let me just also shed some light on what really leads to all this. Religion remains to a very important factor in our country that drives almost all our activities. People tent to blindly follow whatever their religion preaches. The fact that the uneducated people want sons and not daughters actually results them in having more kids than they can afford to take care for. Also, early marriage of girls is another big problem. This leads to them doing more children in their lifetime than a normal woman would do. All these stagnant social norms are doing no benefit to us, only harms. Then we have other good results which are tending to propose bad results. It is good that there is a fall in the death

Rate and people live longer. However, it is increasing the burden on our economy as most old people add little to the growth of our country. So, all these social, economic, political factors simply add up to the misery of our country. But of course, we can take small steps to bring this problem under control. We can spread the awareness of family planning and the use of birth control measures. Let us educate people so they understand the importance of these things. Let us make life easier for people so that they also think about the benefit of nation. We can together work towards making India a more live able place.