The Vital Importance of Shopping Bags

It is common for a green-living website to have something up about plastic. This site is no different. But that’s a good thing. Plastic bags are so common now I can bet you don’t even give them a second thought. Until they start over-running your house that is. The most popular solution at that point […]

It is common for a green-living website to have something up about plastic. This site is no different.

But that’s a good thing.

Plastic bags are so common now I can bet you don’t even give them a second thought. Until they start over-running your house that is. The most popular solution at that point is to dump them in the bin and bid them goodbye, but ‘recycle’ is not really a word that comes to mind right then, is it… No, that word comes to mind only later, as a passing shadow. “Oh, instead of throwing those plastic bags maybe I should have reused them. Oh well…” And so, the thought simply passes. Agreed, there’s no point wailing about something that’s already happened. But before you do it the next time you might want to give it a thought.

Most of the plastic bags we accumulate are from shopping. At your grocery store, a clothes outlet, food takeaways… Every single place likes to parcel their product with a plastic cradle to carry it. It’s strength, durability, convenience, and sheer cheapness has literally overrun the globe. What an amazing invention! But it is these very qualities that are also a major problem, and a dangerous one too.

But before we get into all the doomsday forecasts and all, first allow me to give you a small history lesson.

Kroger and Safeway were the first 2 grocery stores to make use of plastic bags, in the year 1982.

And that, class, is the end of today’s lesson. See, such a small lecture. Don’t you wish all your lectures were like that?

Now back to the doomsday forecast. Plastic bags are, above all else, cheap. They are made from ethylene, a by-product of petroleum, and their cheapness means a cashier can happily provide you with 2 bags for the product you purchased. Industry figures show 90% of all grocery bags are plastic. According to the Environmental Protection Agency (EPA), between 500 billion to a trillion plastic bags are used worldwide each year. 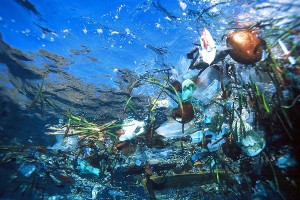 the plastic and garbage that accumulates in the ocean

Plastics, as you can see, are extremely popular. But when it persists in the environment, it becomes a hazard to nature. Most of the time, these bags end up in landfills, and can take up to 1000 years to decompose. Even when they do, they release toxic substances that can seep into the ground and pollute water sources, poisoning them and making it unfit to drink for any living creature. Even the production of plastic bags releases harmful chemicals. And only 1-3% is estimated to be recycled. The rest find their way into landfills, oceans, rivers, and parks. Approximately 1 billion seabirds and mammals die each year by ingesting plastic bags.  Not only that, these poor animals suffer a painful death. In the ocean, sea mammals get caught in plastic bags and aren’t able to surface and breathe, and thus drown. What a shame, and a disgrace! We have forced a creature of the sea to die in fear of the very environment it loved. And how many cases have we heard of cows dying because they ingest plastic while foraging in garbage cans. They die painfully, the plastic going and choking or coating their small intestine. And here in India, cows are revered as sacred. In effect, we are responsible for the deaths of the very creatures some of us worship. 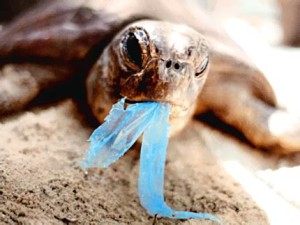 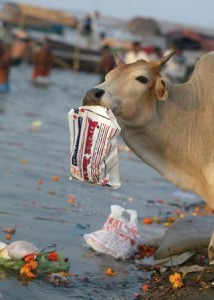 On the other hand, the other alternative most people would go for is paper bags. Not a good idea. Paper bags can be even more harmful to the environment. Paper comes from various plants and trees (depending on the quality) and increased paper consumption risks higher rate of deforestation. Less trees in turn will lead to less absorption of greenhouse gases, which too will have a negative effect on the environment.  Also, when paper degrades, it too releases harmful substances. In the Comparison of the Effects on the Environment of Polyethylene and Paper Carrier Bags, published by the Federal Office of the Environment in August 1988, it was reported that paper bags can generate 70 times more air pollutants and 50 times more water pollutants than plastic bags.

So in that case, what should you use? The best solution is to carry a cloth/ canvas bag yourself whenever you go shopping. Cloth is biodegradable, and also very convenient. It is reusable and can even look more stylish!  But this is a measure that individuals will have to take. Very few retail outlets provide cloth bags to carry your items home, so it is up to individuals to take up this measure.

What with having to pay for plastic bags when you go shopping (which I think is a necessary, and excellent idea), cloth/canvas bags are the way to go. I would also suggest that people get together and push for the motion for the government to make it compulsory for every retail outlet to have recycle bins, where people can dump old plastic bags, so that they can be reused or recycled. Further use of biodegradable plastic, instead of normal or photodegradable plastic is also a better idea, and we should insist that outlets supply us with more of these. We are the ones paying them after all, and if we are united in this then we can definitely make a positive change.

And then it’s shop, shop, shop without any worries.