Hydertrophication (or eutrophication) is caused when an excess of nutrients (natural or artificial substances) is present in a water body. Although eutrophication does occur as a natural process, anthropogenic activities have alarmingly increased the rate of it and its effects could take a thousand years to neutralise. Eutrophication usually includes the addition of compounds of […]

Hydertrophication (or eutrophication) is caused when an excess of nutrients (natural or artificial substances) is present in a water body. Although eutrophication does occur as a natural process, anthropogenic activities have alarmingly increased the rate of it and its effects could take a thousand years to neutralise. Eutrophication usually includes the addition of compounds of nitrogen or phosphorous, or both. This can happen due to many reasons, such as agricultural run-off and septic systems and sewage entering the water, and also nitrogen from acid rain, which makes inorganic and organic nutrients available in the water. An increase in the amount of atmospheric nitrogen also contributes to the rise in nitrogen compounds present in the water because it can enter the open ocean. Phosphate is generally the major culprit in this process but after the phasing out of detergents containing phosphates in the 1970s, domestic run-off and agriculture seem to be the primary factors of eutrophication.

In aquaculture, often fertilizers containing such nutrients are intentionally added to water to increase the productivity and biomass of fish species that are important recreationally and economically. The over-enrichment of water with nutrients directly results in the blooming of blue-green algae and a large depletion in the amount of oxygen available in the water body, with this depletion labelled ‘hypoxia’. The two are directly related; algae sink to the bottom upon dying and decompose, with bacteria converting the nutrients into inorganic matter, and this entire decomposition procedure consumes oxygen, the required amounts of which are bound to increase exponentially with the growth in algal population. Thus, when nitrogen added to water causes blooming of algae, the amount of oxygen consumed for their decomposition increases and this creates a lack of oxygen available for fish and shellfish that also require oxygen. This state of oxygen depletion is known as hypoxia. It is a primary symptom of a trophic lake (i.e. a lake in which eutrophication has occurred.)

Crazily enough, hydertrophication can also occur in terrestrial ecosystems, mainly due to excess of nitrogen. Plants and trees in terrestrial ecosystems rely on microbial nitrogen fixation for their supply of nitrogen because N2 is a stable gas and is not readily available. However, when an unnecessary amount of nitrogen is present in an ecosystem, it becomes nitrogen-saturated, and it begins passing this nitrogen down to marine, freshwater and coastal ecosystems. Aquatic or terrestrial, eutrophication can have a range of effects on the ecosystems and even on humans. For one, the abnormal amount of algal growth can upset the balance of the system, and change the species composition. Also, the presence of nutrients in the water makes it unsafe if it is mixed with our drinking water. Beautiful blue water bodies turn shades of green, yellow, brown or red (and smelly). The lack of oxygen in the water bodies leads to creation of dead zones – a dead zone is one where hypoxic levels of oxygen depletion cause anaerobic conditions that promote the growth of Clostridium botulinum, bacteria that produce toxins deadly to mammals and birds. Coral reefs can get damaged. There is a loss of desirable fish species and reduction in the overall fish population. There is also a decrease in the aesthetic value of the water body. 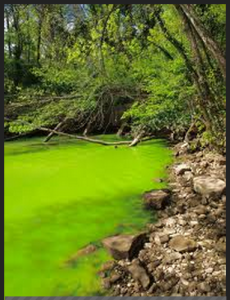 Sometimes, an increase in the amount of a nutrient which is supposed to be a limiting nutrient results in new invasive species outliving the originally inhabiting species. Additionally, some species of algae are toxic to plants and animals, and their blooming can result in animal mortality. These can also work their way up the food chain and affect humans, for example, in the case of shellfish poisoning. Shellfish such as mussels and oysters that are food for humans absorb biotoxins created during algal blooms and then pass these on, causing toxicity and poisoning in humans too. Lastly, stagant water collects a lot more nutrients than water bodies with replenished supplies, and wetlands that dry up cause an increase in nutrient concentration.

The process of eutrophication also occurs naturally especially in lakes, e.g. lakes in the temperate grasslands. But on its own it is slow and happens on geological time scales. But anthropogenic eutrophication is of an unnatural rate. After the Industrial Revolution, industrial activity and other humankind causes have resulted in an increase in the rate of phosphorous cycling by four times. Between 1950 and 1995, 600,000,000 tonnes of phosphorous have been estimated to be used on the Earth’s surface, mainly croplands. Fortunately, measures have been taken to reduce sources of phosphorous and some control on eutrophication is being demonstrated. Small steps that we can take to reduce the devastating effects are reducing our waste, not dumping it in or near aquatic ecosystems, abstaining from the use of pesticides or fertilisers in our gardens, ensuring our detergents are phosphate-free, and making sure our waste water does not directly enter the water system.