You are here: Home \ Environment \ Man-Made Lands in the Middle of Water: BIG Time Dangerous
Environment
0

Man-Made Lands in the Middle of Water: BIG Time Dangerous

Question: What is common between the East Coast Park beach of Singapore and Bandra in Mumbai? Answer: Both are examples of reclaimed land from the sea. This means, there used to be sea water in place of the land that we see now. The entire shoreline in the East Coast Park is man-made and so […]

Question: What is common between the East Coast Park beach of Singapore and Bandra in Mumbai?
Answer: Both are examples of reclaimed land from the sea. This means, there used to be sea water in place of the land that we see now. The entire shoreline in the East Coast Park is man-made and so is Bandra.
Of course, land reclamation is a genius idea to support the ever increasing human population. The need for living space, that is, land is increasing at the same rate. The prices shoot up and all the space is taken up. Then what? Let’s conquer the sea and put up land on it, giving us even more space. This is the motivation behind land reclamation. 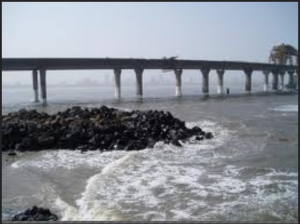 The most common method of land reclamation is filling the sea area with rock, boulders and cement. This is followed by a layer of clay, soil and sand up to the desired height. The attempt is made best to match the natural soil profile.
However, doing a rather unnatural thing as putting land on top of a sea and living on it comes with its own hefty price. Reclaimed lands have a myriad range of troubles, both for humans as well as the environment. The probability of natural disasters also increases a lot on these lands.

Effect on Natural Habitat: Intertidal zones and mudflats are of vital importance as they support very delicate niches and specific flora and fauna. Land reclamation takes up almost all the space of mudflats near rivers. Almost 80% of estuarine area is claimed by man-made land, severing the marshy ecosystem that is important for slowing down the velocity of river water into its mouth. A lot many species of crabs and mangrove forests have been completely wiped out due to the Bandra reclamation in Mumbai.

Not only this, the additional land taking up the space of the previously present water, the water level on the coast rises considerably. This is called a ‘coastal squeeze’.

If at all the organisms survive this shift, the amount of urbanization on land is sure to wipe them out. Species are faced with the options of adaptation or perishing. Some stay, some die. Overall, land reclamation forces organisms out of their own habitat. Decreased prey numbers will ultimately intensify competition and eventually decrease the equilibrium population size.

Effect of Pollution: New land means more people and newer settlements. This means pollution comes along. The proximity to the ocean drives people to dumb their waste in the ocean, that being considered the global garbage at the moment. The amount of plastics and such non-biodegradable waste found in the continental shelf of the ocean near landfills is especially high. We know that most of the marine life is supported by the continental shelf and any sort of disturbance there has a direct effect on the marine ecosystem.
Construction sediments near estuaries has shown to reduce the number of wading birds, for example, in the Orwell Estuary. The feeding facilities have decreased due to the change of soil density and a shift in texture. The natural mud is replaced by sand from the infilling which makes it difficult for the wading birds to catch their prey. For example, species like oystercatcher and dunlin then lose feeding grounds as they prefer a muddy substratum whereas a sandier substratum would favor the bar-tailed godwit and ringed plover.

Effect on Tidal Waves and Sea Currents: Although a long and detailed study is conducted before making new lands, there are always consequences to be dealt with. The natural tidal waves are inhibited by the jutting out land. This causes the back waves interfere with the sea fauna rooting in the substratum too. In the case of serious miscalculations and engineering errors, the back lashing waves can actually increase the chances of storms and disturbed seas.
Effect on Human Settlement: Landfills or filled up spaces of oceans by land may be an extended space and a boon to humans but it can sometimes be a bane as well. During the rainy season, the mud and rocks sometimes shift underground, making it extremely risky for buildings on the land. Several incidents of multi storey buildings collapsing during the monsoons spring up every year in Mumbai. The land underneath shifts and sometimes the soil gets swept away by the rainwater. If the plinth of the building is not strong, the building collapses, causing a lot of loss in property and life too.

Natural catastrophes have always been happening on coastal regions via the sea. However, man-made islands and land stretches are at a bigger risk of these storms, giant waves and tsunamis due to higher impact rates and lesser time for disaster management.
It is time we get our population and greed in order and avoid this man-made land in the ocean business. The Burj Khalifa may be grand but it is also not natural. In time, the sea will always reclaim what is its own. 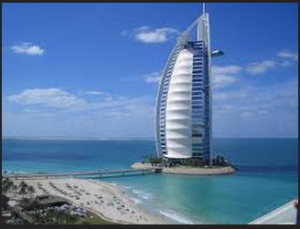