You are here: Home \ Environment \ Health \ Smoking Thrills but it also Kills
Environment
0

Smoking Thrills but it also Kills

Take a break. Every looked around? What do we see the most? On an average everyday we get to see people- young, old, puffing the most deadly and poisonous substance into their lungs. Smoking is now a new trend, a hippy and cool fashion among the teenagers and youth. Be it happiness or depression, the […] 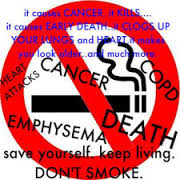 Take a break. Every looked around? What do we see the most?

On an average everyday we get to see people- young, old, puffing the most deadly and poisonous substance into their lungs. Smoking is now a new trend, a hippy and cool fashion among the teenagers and youth. Be it happiness or depression, the only thing the youth today clings to is a rolled paper stuffed with the deadliest poison called TOBACCO. I don’t know should I call it funny or sad.. most of these people who smoke know the harm it does to their body and soul but still continue to puff the filthy tobacco into their lungs. As man has evolved, he had even come up with the worst of all – electric cigarettes.

What’s more shocking is that 90% of the smokers take up smoking before the age of 20. They are either influenced by their peers or learn from their family and friends. It has also become an addiction to many, spending 10 minutes without which is practically impossible for them. They eat, drink and live on smoke. Smoking not only terminates by cigarettes, but it includes a wide range of other implements like pipes, cigars, bidis, hookah, bongs and vaporizers. It is estimated that every year 1.67 million pounds of cigarette butts are dumped worldwide. A national survey conducted on Drug Use and Health showed that over 4000 people under the age of 18 try their first cigarette everyday, which accounts to 730000 new smokers every year. Another report by the Drug- Free schools indicate that children and adults consume more than one billion cigarettes each year.

The story wouldn’t end by saying that tobacco is the only harmful constituent in a cigarette. Nicotine is that addictive component that holds back the smokers to go for it over and over again. Apart from nicotine, smokers inhale 7000 other chemicals from a cigarette smoke. The source of most of these is the burning of tobacco leaf. Tobacco smoke contains 60 known carcinogenic substances. Smoking has an adverse effect on each and every body organ, making it prone to several diseases and reducing immunity.

The most dangerous of all chemicals arising from the burning of a cigarette is the tobacco smoke. It contains tar that stains teeth, lung tissues and fingernails; carbon monoxide that dissolves in blood reducing the oxygen supplied to the brain, heart and muscles; hydrogen cyanide that reduces the capacity of the clearance system of the lungs; free radicals that causes damage to the heart and blood vessels; and radioactive compounds that cause cancer. The other noteworthy effects of tobacco on body are-

Effect on respiratory system- Smoking causes irritation in the trachea and larynx, reduces lung functioning, breathlessness due to excess mucus accumulation in the lung passage and swelling of the lung airway. It also leads to increase risk of lung infection and damages air sacs.
Effect on the circulatory system- It raises heart rate and blood pressure, leads to constriction of blood vessels, reduces the oxygen content in the blood and reduces blood flow to the fingers and toes.

Effect on sexual organs- In man it lowers the sperm count and leads to higher changes of impotence. In female it reduces fertility and increased risk of cervix cancer. The menstrual cycle is disturbed and causes great damage to the young foetus during pregnancy.
It causes other problems like ulcers in the digestive tract, reduced ability to smell and taste, inflammation of the stomach and intestine, ageing of skin, reduction in the bone density and high risk to blindness. It reduces visibility by constricting the eyes.

Hold on!! Smoking not only have adverse effects on humans but also deadly consequences on the environment too. Firstly tobacco cultivation leads to a large- scale loss of biodiversity , land and degradation by the use of extensive pesticides. Cigarette butts dumped in the water bodies are eaten by the fishes, birds and animals. This when consumed by humans has adverse effects on their health too. Large chunks of trees are slaughtered to pave way for tobacco cultivation which in turn brings an imbalance in the ecology as tobacco plants use nutrients at a much higher rate compared to the other plants. Tobacco production also reduces the availability of land for food cultivation and it is said that 10 to 20 million of people could be fed every year if the land was used for harvesting food crops. The tobacco industry manufactures solid, liquid and gaseous wastes all of which is a growing environmental concern. It also increases the risk of fires. It is estimated that one tree is consumed for every 300 cigarettes which are used up in a fraction of second worldwide.
All the stages of cigarette production and consumption leads to ecological disturbance right from its cultivation (deforestation) to its manufacturing to its usage. All lead to global warming and uninvited death. It is not that smoking is a fashion among the elite and rich, studies suggest that the poorest households spend 60% of their income on tobacco.
Ban of smoking in public area has proved its worth. But even strict regulations are needed to be employed to reduce the use of tobacco related products among the youth. Comprehensive tobacco control products and strategies need to be implemented. Public awareness regarding this topic is very crucial. 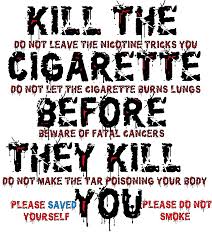 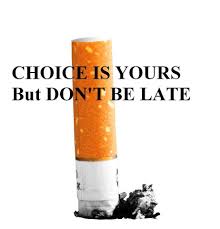 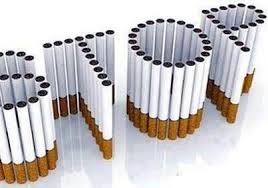 “Break the chain, what are you waiting for,
It is not cool or funky to light a cigar and puff it in your lungs,
Kill the cigarette before it kills you,
Be smart and stop it right NOW”