Nanotechnology is considered as one of the key technologies of the 21st century and promises revolutionizing the world. Only engineered particles such as metal oxides, fullerenes, nanotubes under 100nm fall under the category of nanoparticles. This implies that some particles that occur naturally or are by products of other processes such as carbon black, fire […]

Nanotechnology is considered as one of the key technologies of the 21st century and promises revolutionizing the world. Only engineered particles such as metal oxides, fullerenes, nanotubes under 100nm fall under the category of nanoparticles. This implies that some particles that occur naturally or are by products of other processes such as carbon black, fire smoke, welding fumes are not included in the category of nanoparticles. These nano scale particles have a small size and large surface area due to which they gain novel properties and functions which differ markedly from those seen in the corresponding bulk counterpart. And these unique properties of nanoparticles could also be responsible for their potential toxicity. With more than 1000 nanoproducts already on the market this technology is rapidly advancing. So, Nanotoxicology can be defined basically as the study of the toxicity of nanomaterials. To avoid ensuing undesirable effects of nanomaterials which are moving into the applications arena, it is important that nanotoxicology research uncovers and understands how these multiple factors can influence their toxicity. Nanotoxicology is a sub-specialty of particle toxicology which addresses the toxicology of particles at nano scale which appear to have toxicity effects that are unusual and not seen with larger particles. 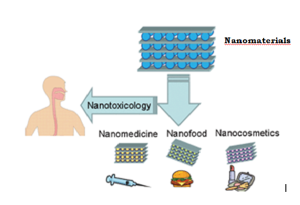 The effects of smaller size…

The defining property of nanomaterials is their small size which being in the transitional zone between individual atoms or molecules and the corresponding bulk materials thereby helps in modifying the physicochemical properties of the material and fostering increased uptake and interaction with biological tissues which in some cases may lead to greater pro-inflammatory effects in lungs, tissue. In addition, some nanoparticles are able to translocate from their site of deposition to distant sites such as the blood and the brain. These plethora of effects which otherwise are not observed with the same material in larger (bulk) form can generate adverse biological responses in living cells. The nanomaterials are also leading to direct and indirect exposure to humans as they are being used increasingly for commercial purposes such as fillers, opacifiers, catalysts, water filtration, semiconductors, cosmetics, microelectronics etc.

The effects of high surface area to volume ratio….

Another defining property of nanomaterials is their extremely high surface area to volume ratio which renders them highly reactive by increased production of reactive oxygen species (ROS), including free radicals. ROS and free radical production is one of the primary mechanisms of nanoparticle toxicity. It is this high reactivity which potentially could lead to toxicity by enhancing harmful interactions of nanomaterials with biological systems and the environment. ROS production has been found associated with a diverse range of nanomaterials including carbon fullerenes, carbon nanotubes and nanoparticle metal oxides. This increase in ROS could result in oxidative stress, inflammation, and consequent damage to proteins, membranes and DNA.

Shape of the nanoparticles has been shown to have a pronounced effect on the biological activity. Some open ended single walled carbon nanotubes are highly efficient in blocking the ion channels

The human body has several semi-open interfaces for direct substance exchange with the environment,

Skin is the largest primary defense organ in our body and directly comes into contact with many toxic agents. The upper primary protecting layer of skin which is strongly keratinised acts the rate-limiting barrier to defend against the penetration of most micron sized particles and also to hazardous exogenetic toxicants. In day-to-day life Application of topical creams and other drug treatments are also responsible for skin exposure to nanomaterials. It was recently observed in a clinical study  that treatment of burns using nanosilver coated dressings led to abnormal elevation of blood silver levels and argyria (blue or gray discoloration of the skin due to silver accumulation in the body over time which is a ‘cosmetic problem’).

The respiratory system serves as a major portal for ambient particulate materials. Particles of micrometer range being different from nanosized particles are largely trapped and cleared by upper airway respiratory system. The deposition of inhaled nanometer sized ultrafine particles takes place mainly in the alveolar region. Primarily, they get absorbed across the lung epithelium and then can enter the blood and lymph to reach cells in the bone marrow, lymph nodes, spleen and heart and thereby prove hazardous.

Nanomaterials can reach the GIT after clearance from the respiratory tract through the nasal region, or can be ingested directly in food, water, cosmetics, drugs, and drug delivery devices.

On exposure to light….

Nanoparticles may promote the formation of pro-oxidants when exposed to light or transition metals which can cause destabilization of the delicate balance between the biological system’s ability to produce and detoxify the reactive oxygen species (ROS). Size, shape and aggregation of nanoparticles are nanomaterial characteristics that can give rise to ROS generation which due to their high chemical reactivity can react with DNA, proteins, carbohydrates and lipids in a destructive manner leading to cell death either by apoptosis or necrosis. The macromolecules which are affected most frequently are those genes or proteins, which have roles in oxidative stress, DNA damage, inflammation or injury to the immune system. For example, some nanometer-sized preparations of Silicon dioxide were found to increase acid metabolism eventually leading to lung inflammation and pulmonary disease.

So, I would like to conclude that Nanotoxicology is proposed as a new branch of toxicology to address the gaps in knowledge and to specifically address the adverse health effects likely to be caused by nanomaterials.

It is affecting people not at nano scale but at large scale….!!