How are Oil Spills Cleaned?

Oil is imperative for normal life to function. Even after major efforts taken to reduce our dependency on oil, it still holds a firm grasp on the world and its inhabitants. As most of us know, oil is only available on select places and is transported to different parts of the world via different mediums. […]

Oil is imperative for normal life to function. Even after major efforts taken to reduce our dependency on oil, it still holds a firm grasp on the world and its inhabitants. As most of us know, oil is only available on select places and is transported to different parts of the world via different mediums. Of such mediums, 60% of the share is held by oil being transported by sea or waterways. Now, the ships or containers carrying oil have to cover large distances to reach their destinations and during the journey can meet with a tragedy resulting in the oil being spilled on to the sea or ocean causing serious environmental damage. We have all heard and read about the effects of oil spill on the environment and the habitat around it and that agencies are working day and night to clean up the oil spill often leaving most of us wondering as to how the cleaning process is taking place. The responsible agencies have a few simple but effective ways to clean up an oil spill. The fact that oil and water don’t mix probably works in our favor. When an oil spill occurs, the oil forms a millimeter thick layer that floats on water. Oil eventually spreads out and the layer thins in the process until it becomes a widespread sheen on the surface of water. The methods used depend upon various factors such as how fast can a crew reach the oil spill, waves, water currents and the weather. 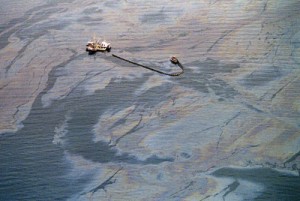 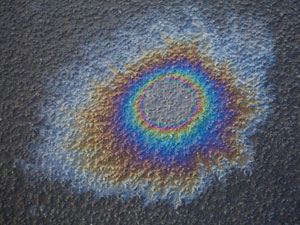 Though the methods may seem easy, cleaning an oil spill is rarely such an easy task. Oil spills are a very messy and very harmful to the environment. Sometimes an oil spill can reach shores and have a major effect on marine life and marine life and wildlife, proving deadly majority of the times. This is when cleanup crews have to use other methods to clean an oil spill. 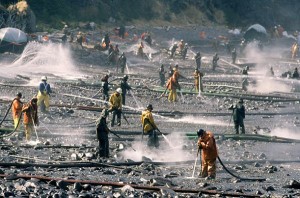 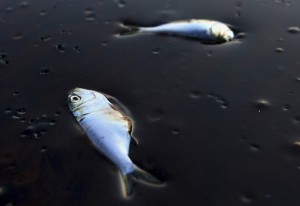 The magnitude of oil spill and its closeness to marine life and wildlife habitat have an effect on the number of marine life and wildlife hurt or killed. Seals and otters can become covered in oil which breaks down the insulation provided by the fur of sea mammals and also the water-resistant properties of birds’ feathers. Animals can also be poisoned by the oil they ingest while cleaning themselves clean. Oil spill cleanup agencies use dummies and floating balloons to scare the marine life and wildlife away from spill areas but doesn’t help much in limiting the effect on marine life and wildlife. According to recent reports, there has been significant decrease in the number of oil spills in open water, but sadly hasn’t ceased completely yet. And even though we use such extensive efforts to clean up the oil spill, they still leave a mark on the environment. Even today, after the Exxon Valdez oil spill in March 1989, the area along Prince William Sound in Alaska is still polluted from oil which has yet to biodegrade completely.