Plastic pollution involves the presence of plastic products in the environment that will affect human being, wildlife and its habitat. Plastic can pollute the environment in many ways. Plastic pollution can affect the lands, oceans, water bodies. Plastic have been banned in some places and efforts are taken for plastic recycling. The Plastic pollution can be correlated to the fact that plastic is low in cost and it can be easily afforded by Human Being for their daily life. Plastic Pollution occurs in many occurs in many ways, including the waste thrown by human on the streets, marine waste (waste released in lake, river and sea), water polluted by plastic particles, friendly Floaters and plastic netting. The plastics which are produced are not recycled and they are just for single use in package items or other products which will be thrown out within a year. Often the consumers use them just for once and then throw them away after the use. As per the USA’s Environmental Protection Agency, the plastic constituted over 12% of the solid waste, and this was marked in the year 2011. While in the year 1960, there was only 1% of solid waste in USA. The effect of plastic in Land is that it can release harmful chemicals to the soil and the surroundings. These chemicals get into the soil and then go into the surface and get with the water under the surface. When this water is taken out for irrigation or for other purposes, it can cause serious harm for the plants and the animals. The Landfill areas are piled up with high amount of plastics of various kind and they cause serious effects to the surroundings. The landfills have a lot of microorganism which could speed up the biodegradation of the plastic materials. When the microorganisms break down the plastics, it will let out methane, which is a harmful green house gas and contributes significantly to global warming, which is another factor which is prevailing in Earth. While in some landfills, new technologies have been installed to capture Methane gas, to use it for natural source, but most of the landfills do not have these technologies. The Methane is not released in landfills alone, they are released by the plastics which are left on ground, the only thing is that, time consumption is more. 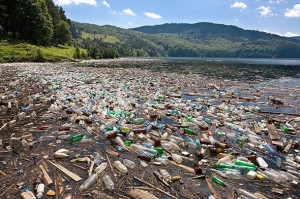 The effect of plastic in ocean is that, Nurdles (micro plastic) are used to make plastic products, which are imported in Cargo ships. These Nurdles are spilled in the ocean during transportation and in a year about 10% of beach litters are Nurdles. Plastic present in Ocean degrade within a year, but not completely. During the degradation process, the plastic will release chemicals such as Polystyrene and bisphenol A into the waters. Polystyrene and Nurdles are the most common ocean Pollutants. In 2012, the estimation of plastic content in water was about 165 million ton. 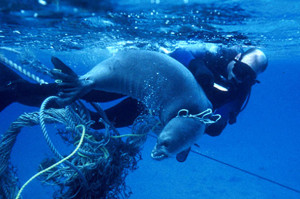 While the Plastic effects on animals and Human Being. Talking about the animals, it can poison animals, which can indirectly have effect on human beings. Plastic pollution is a threat to marine animals. Some marine species such as the turtles are found to have some amount of plastic in their stomach, which will lead to starving of animals and leads to death. Some marine living being are caught in nets, which can harm them or kill them. Over 260 species have been found to be affected by plastic, either ingested plastic or entangled in plastic. When a species is entangled, it will reduce the species movement, stopping it from finding food. The estimation of marine animals perishing due to plastic is 400,000 annually. In 2004, it was estimated that the seagulls of North Sea had an average of 24 pieces of plastic in their stomach. Plastic do not degrade in oceans, they get smaller and smaller, so when they get small, they look like food for the marine animals. When these plastic are consumed, they get choked and die. 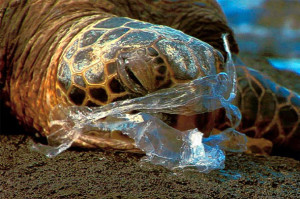 The plastic affect human also. They release chemicals, which can cause harm to human’s health. The addition of chemicals has made the plastic so multipurpose, while there are problems in it. Some of the chemicals have adverse effect n human being and some chemicals are absorbed by our skin. It is not clearly known, how much human beings are physically affected by plastic, but the contact of the chemicals from the plastic can cause Dermatitis. Plastic pollution can cause eye sore to some eyes which will interrupt the natural environment. 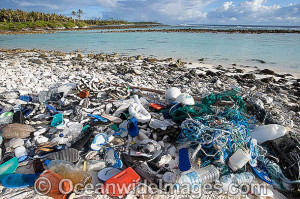 The plastic has the effect to change the entire ecosystem. The plastic debris floating in the ocean, acts as rafts for small species and helps them grow and travel on, which will lead into new species or an alien species. Since the plastic degradation will take a long time, the marine animals can take sufficient time to adapt to the chemical waters. Here are some of the ways to stop plastic pollution