You are here: Home \ Environment \ Insecticides: Poison for All
Environment
0

Insecticides: Poison for All

The farmer pulled out yet another insect eaten plant by its roots from his field. The field was almost entirely wrought over by the insects. This year, he would not be able to repay his loan. The reason, you ask? Too many insects. Or rather, too much insecticide. That is ironic, you say, given the […]

The farmer pulled out yet another insect eaten plant by its roots from his field. The field was almost entirely wrought over by the insects. This year, he would not be able to repay his loan. The reason, you ask?
Too many insects.
Or rather, too much insecticide.

That is ironic, you say, given the fact that insecticides and pesticides are applied on crops to protect them from pest attacks. An insecticide is a group of chemicals balanced in fixed ratio that is used to kill or control pest populations. These chemicals usually target the nervous system of the insects rendering them paralyzed and ultimately dead. However, the trouble is that these chemicals are not species specific and harm other organisms too, including the non-pest insects, birds and humans.
But, the truth is, pesticides are doing more harm to crops than any good. At the same time, pesticides are harmful for humans and causes diseases. Insecticides pose quite a lot many dangers to the environment.

• Pest Resistance: Insects grow resistance to any given chemical insecticide by the age old mechanism of mutation and natural selection. A given insecticide might work well for a given species of pests for a short interval of time. However, one out a thousand insects might develop a gene mutation that protects it from the chemical, thus making it resistant to that insecticide. With natural selection operating, only the forward generations of this resistant mutant insect will survive while the wild and vulnerable type will be wiped out. This gives forth an army of resistant pests. The generation time of insects is very short which makes it difficult to come up with newer chemicals. As a result, more and more concentration of the insecticide is sprayed on crops, making the yield even more toxic for consumption. 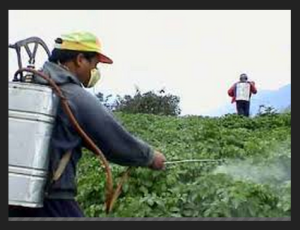 • Non-Specificity: Due to the non-specific nature of insecticides, many other non-pests are also caught in the cross wires. A lot many insects that are actually crucial for pollination also die to the pesticides and the crop yield is low. Mostly, it is mistaken to be a lack of nutrition and a lot of synthetic fertilizers are pumped into the soil adding to the misery.
• Bioaccumulation and Biomagnification: When a toxin enters a food chain, it gets accumulated in one trophic level. This is bioaccumulation. However, via the food chain, as the trophic level increases the magnitude of negative effect of the toxin increases with every higher link. This is called Biomagnification. As far as insecticides are concerned, it enters via the annelids, etc. in the ground or by the insects themselves and ends up in larger mammals. The effects include paralysis and impairment of body systems and sometimes, death as well. This causes an imbalance in the ecosystem and affects food chains and biological pyramids.

• Water contamination: The run-off from agricultural fields enters water bodies and streams, contaminating them. Worst affected is the ground water because it is bound by all sides and the chemicals settle in it most easily, as opposed to fast flowing rivers or streams.
• Effect on Human Health: Almost all pesticides used today are hazardous to the skin. It causes blisters and penetrates deep into the skin giving rise to ugly wounds.
Worst of the systems affected by organochlorines is the nervous system. It impairs the sensory nerves, making response time longer. A lot of cases see partial or total paralysis as well, depending upon the concentration and exposure. Farm hands are at a great risk as they use the highly concentrated and contaminated water in and around the agricultural fields for drinking, etc.
Aldrin, a pesticide can seriously injure the liver and can cause lung cancer. DDT, a common and infamous pesticide has a large range of ill effects. Those include liver cirrhosis and damage, chronic hepatitis, disorders of the endocrine and reproductive system, breast cancer, immune suppression, cytogenic effects, polyneuritis, etc.

Acute ingestion of organoclorines causes a range of symptoms like dizziness, frothing at the mouth, nausea, vomiting, tremors, confusion, etc.
Neurological symptoms are the most prominent in insecticide poisoning cases. Kepone, a now banned insecticide was manufactured in Virginia, USA. The workers developed tremors and convulsions after 30 days of exposure which came to be known as ‘Kepone Shakes’. Even now, although Kepone is out of use, insecticide induced neurological issues are commonly called by the same name.
Pesticides have two chemical components:
1. The active component: It kills the pest and affects the nervous system.
2. The inert component: It forms a soluble complex and helps the active component to work even more efficiently.
What most manufacturers do not tell us and is rarely mentioned under the risk column on the labels are the names of the ingredients going into the making of the inert component. When soluble in water, many of these chemicals may become toxic on being inhaled or absorbed by skin.
Children are at a higher risk of contamination than adults due to their small portions of ingestion. The concentration of the chemicals increases manifolds in their tiny portion. Fetuses are also affected by insecticides while in the womb.
Maybe we should all grow some brains and stop using synthetic insecticides before they completely annihilate our brains. Using organic alternatives is the healthier way to keeping pests at bay. Encouraging pest predator population growth, facing bollworms will red dried chilies, wireworms with neem leaves, etc. are some of the alternatives to synthetic insecticides. At any rate, it is better than dying after eating insecticide laden fruits.