Metal hands and metal legs and everything else covered in mental – that’s the first thing that we think of when someone says Robot. Obviously, to us it is an abiotic force that doesn’t have any feelings or emotions whatsoever and sometimes we also go as far as considering them as our personalized maids. If […]

Metal hands and metal legs and everything else covered in mental – that’s the first thing that we think of when someone says Robot. Obviously, to us it is an abiotic force that doesn’t have any feelings or emotions whatsoever and sometimes we also go as far as considering them as our personalized maids. If you are a big movie or sci-fi buff, the ideas of robots don’t just stop here – it goes on with the stories of matrix and world domination. Robots revenging the human race and dominating them. However fancy and dangerous this can sound, there are in reality some robots who not only work for the betterment of humankind but also for the enduring conservation of the environment. These are the green robots: 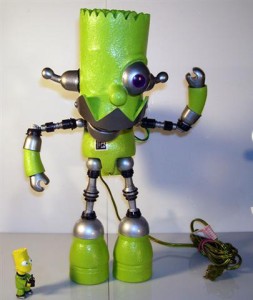 Robotic Predator – SlugBot
Well, in the current progress of science, no such robotics are developed that can dominate or enslave humans. But with this very idea in their head, the University of West England’s Bristol robotics studied the robotic predator theory. This didn’t mean that they meant to target humans, no this was an implementation to see if robots were useful assets in the pesticide department. They developed a prototype for a robot with a direct motive: Catch garden slugs and turn them into fuel. The idea itself of programming and mechanizing such a venture deserves praise, however it is the focus on the fact that a garden pest can be converted into energy that really makes the SlugBot a green automaton.
The procedure for this bot is to catch 10 slugs per minute during the night, store them in a container and then return to base where it recharges and dumps the mollusks into a fermentation chamber. There the bacteria will convert the slugs into biogas, which in turn would load a fuel cell for the SlugBot to use later.
If you’re worried about the slugs, don’t be. For the newest target of the Predator bot are pestering flies. EcoBot II is a self powered fly-eater, which attracts its prey by emitting an odor similar to that of human excrement. The team is also working of a further enhancement called the EcoBot III which will be created to be a plankton munching, self powered robot to live in the sea.

The Sewage Pig
As the dream goes, I’m sure a lot would love a robot whose sole purposes would be giving massages and the likes of that sort. We do come close, to having a robot that actually cleans up your mess! These robots are suitable in Germany where they are known are the electric mole or as ‘pig’ robots plainly. They are literally bound to the purpose of cleaning your crap. Produced by Thermo-System, the wheeled robots stalk through the human waste, using harnessed solar energy to help them dry an estimated of 60 million tons (54 million metric tons) of sewage a year, in Germany alone. As the robots truck through the sludge they also turn it, aerating the ravenous microbes. If you thought them simply cleaning the mess wasn’t enough, the fact that these electric moles keep operating cost and carbon emission to a low point for the sewage plants, should make you like them better.

The Underwater Bot
Who doesn’t like a good swim? But as one notices our natural water reservoirs are getting polluted day by day. Aside from safeguarding these reservoirs for the purpose of irrigation, large water bodies are also useful for boating, swimming and other associated summer pastimes. Humans also have a particular fondness of creating water reservoirs where natural has not already provided him – dams, are a common example of that. If a river is made a dam downstream, what was once a valley is now a source of water for the inhabitants. The process of dam building sounds great – but it does have one folly to it. Manmade lakes tend to have a very large amount of valuable lumber at the bottom of them. In fact, these an estimated 300 million salvageable submerged trees out there with an estimated value of $50 billion. The actually dollar question would be: Why cut all these valuable oxygen producing, carbon collecting trees when we can benefit from it?
Here to help us is Triton Logging’s Sawfish. The 7 thousand pound (3,175 kilograms) remote controlled submarines dives down, attaches air bags to the tree trucks and then gets to sawing. Triton currently harvests Douglas fir, Western White Pine, Lodgepole pin, and hemlock year round in Britain Columbia. Not only is this robot green, it also makes a lot of profit!

So while you go for another movie that proclaims a war between the cyborgs and the humans, remember that there are these tiny green robots, who though have no attached emotions, care for the environment and are making it a better place. You should try to do your bit too and spare them the animosity.