Singapore has a booming economy with one of the world’s best health and education systems. It’s also reputed as being one of the world’s cleanest and safest cities. Despite all the prosperity the city-state does not have enough water to meet the needs of its 5.3 million citizens. Singapore thus, imports fresh water from Malaysia […]

Singapore has a booming economy with one of the world’s best health and education systems. It’s also reputed as being one of the world’s cleanest and safest cities. Despite all the prosperity the city-state does not have enough water to meet the needs of its 5.3 million citizens. Singapore thus, imports fresh water from Malaysia under the ambit of a 100-year water contract, scheduled to expire in 2061.

To ensure self-sufficiency in water till 2061, Singapore has adopted a three-pronged water model:

1)      Improved rainwater catchment: Singapore wisely conserves its water and has 17 reservoirs to capture runoff from roofs, streets, sidewalks, open land and streams. To further slow and capture runoff, the city is attempting to reforest its few open areas. This provides for 30% of the island nation’s water.

2)      Water recycling: In order to recycle wastewater to highly purified water, the government launched a project called ‘NEWater’ in 2003. There are four treatment facilities across Singapore producing 430 million litres of NEWater daily. NEWater is gaining increasing public acceptance and is estimated to eventually supply about 50% of the nation’s water requirement. Singapore is also improving its sewer and sanitation system to get waste water to processing plants more efficiently.

3)      Sea water desalinization: This well-established technology is highly cost- and time-intensive. Due to this reason it only provides for 10% of Singapore’s water supply but with decreasing costs, the program is estimated to provide 30% of Singapore’s fresh water supply.

From Wastewater to ‘NEWater’

The process of recycling wastewater has been well underway in many countries like Israel, Spain, Australia, the US and the Scandinavian countries. Singapore’s efficient recycling of wastewater on a large scale has however made it an epitome, internationally. The ‘NEWater’ initiative already constitutes one third of the nation’s water supply, and is expected to supply more than half by the year 2061. Due to this successful water strategy, Singapore did not renew a 50-year water contract with Malaysia that expired in 2011. The nation’s objective is to attain 100% water independence by 2061, when another 100-year water contract with Malaysia expires, even though demand will have doubled by then. 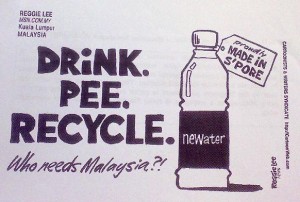 This transition of water from ‘toilets to tap’ can be summed up in five steps:

1)      Water from toilets showers, washers and sometimes factories goes to a treatment plant.

2)      Solid particles and most dissolved biological matter are removed at the plant.

3)      At another facility, this water is next treated to a level similar to distilled water using microfiltration (the water passes through a membrane with tiny holes that traps bacteria) and reverse osmosis (water is pushed through a second, semi-permeable membrane that blocks salt, viruses and pharmaceuticals), and finally zapped with high-intensity ultraviolet light and hydrogen peroxide to kill any trace organics.

4)      Minerals are added into the water before it’s discharged into the ground, lakes or reservoirs.

5)      Months later, the water ends up in household taps, in some cases, after being treated again to meet drinking water standards.

This treated water is primarily used for industrial purposes and irrigation. Only about 5% of tap water in Singapore comes from NEWater. But the initiative holds the key to Singapore’s water sufficiency in future and over the years the initiative has turned into a strategic priority for the nation, not a mere economic necessity. It has been said that the reason why Singapore embraced this technology so quickly is because water is a matter of national security for them.

Following this strategy, the tiny island nation of Singapore has become an epitome of conservation and recycling the world over even when it has minimal fresh water resources.

Model for the future

Singapore has truly set an inspirational model for other Asian countries to imitate. The region is highly vulnerable to climate change and depends to a large extent on the monsoons to meet its irrigational needs as well as to replenish its natural water reservoirs. Latest climate change assessment report by Intergovernmental Panel on Climate Change has also stated that the region will suffer extreme water scarcity leading to political tensions and possible wars. It is thus, rightly said that water will be the oil of the 21st Century.

It is no longer a choice but a necessity to conserve and recycle water. A single source of water is no longer enough to guarantee water security. Cities around the world need to follow in the footsteps of Singapore. Singapore’s former Prime Minister Lee Kuan Yew realized way back in 1965 that water was a strategic resource for national development and formulated long-term urban water management plans whose progress was assessed by him on a monthly basis. However, in many cities around the world water is considered a free resource and an entitlement. One such example is Delhi and there has been complete lack of political will to recycle water and to ensure adequate wastewater management. The city relies heavily on water supply from neighboring states and relentlessly continues to pump out untreated wastewater into the Yamuna and other water bodies. Delhi needs to learn from Singapore and plan for sewage treatment along with sensitizing people about conservation of water.

Everyone must feel an obligation to conserve this elixir of life and governments must launch recycling initiatives to combat water scarcity. To conclude, wastewater recycling undoubtedly has huge potential and could become a crucial model for water security around the world.