‘Sar santey rookh rahe to bhi sasto jaan.’ ‘If a tree is saved even at the cost of the head, it is worth it.’ ~Amrita Devi. Amrita Devi was a member of the Bishnoi tribe in Rajasthan who gave up her life in order to protect trees. Tribal people not cut trees and make paper […]

‘Sar santey rookh rahe to bhi sasto jaan.’
‘If a tree is saved even at the cost of the head, it is worth it.’
~Amrita Devi.
Amrita Devi was a member of the Bishnoi tribe in Rajasthan who gave up her life in order to protect trees.
Tribal people not cut trees and make paper out of it and write ‘Save Trees’ on it. They do not use polythene bags to carry grocery. They do not use vehicles that pollute the air with their exhaust, while on their way to a rally against air pollution.
Tribal people are the true environmentalists on this planet that the rest of us almost ignore.

Agreed, some of the ways of life employed by a lot of tribes are not exactly in keeping what we have termed as the civilized world, but as far as protecting the environment is concerned, they rule. Tribes had realized the importance of sustainable use of the environment a very long time back, even before we had coined the term. Their very way of living is beautifully interwoven with the environment. Tribal people only use what is necessary and never get greedy, as far as natural resources are concerned.
Here are some of the tribes of India and certain things that they do that make them true conservators:

• The Bishnois: The Bishnois are a tribe in Rajasthan and are Hindus by religion. Even so, they do not cremate their dead but cremate them. This is done to prevent the use of trees in the form of the cremating pyre.
This tribe is a staunch follower of the twenty nine tenets given by their founder and mentor, Jambheshwariji. 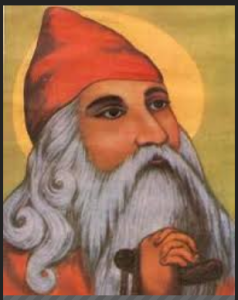 Bis(twenty)+noi(nine)= Bishnoi. He had said that harming the environment meant harming yourself and asked us to protect trees and wildlife around 450 years ago. The tenets are formulated in such a manner that it ensures conservation of biodiversity in the region and a healthy balance of eco-social interaction with the community. 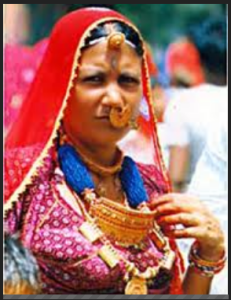 They worship trees and not a single tree can be axed down in their region. They consider the black buck sacred. Wearing blue clothes is prohibited because the blue dye is made from a lot of herbs. There are many such beliefs that they adhere to strictly.
• The Warli Tribe: The Varli tribe inhabits the border of Maharashtra and Gujarat and speaks its own Varli language. This tribe is not as aggressive as the Bishnois when it comes to protecting biodiversity. The well known Warli paintings are the ones that speak volumes for the tribe’s deep respect for Nature. Made with basic triangles, squares and circles, these paintings show glimpses of their daily life which is very eco-friendly. In the paintings, trees always surround their huts and men and animals are shown to live in perfect harmony and co-existence. Being true naturalists, the materials used for building their huts is wet earth, cow dung, etc. 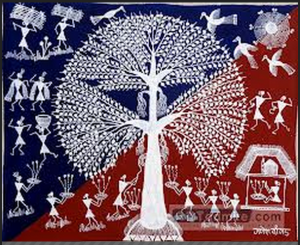 • The Tharu Tribe: This tribe lives in the Indo-Nepal border. The Tharus are the largest and oldest ethnic group living in the Terai region and follow Hinduism. Their culture is rich with dance, songs, handicrafts and tribal magic. It is a noteworthy fact that their handicrafts are always made with Nature’s refuse. Dry grass, dead twigs, etc. are used for their decorative handicrafts. They always make these crafts for their personal use and never for marketing or sale. They consider Nature at par with God and only use what is necessary. Meat is prohibited in all public ceremony. Their tribal Goddess (the Earth) is called ‘Bhumsen’ in their tribal language. Traditional Tharu household systems are based on the natural laws that keep the environmental balance intact. The agriculture system and their cooking system are all inclined towards green ways of life. This is the reason why these tribes have inhabited and used the resources in the Terai region for a long time but no harm to the environment was ever caused and nor did the ecological balance shake. 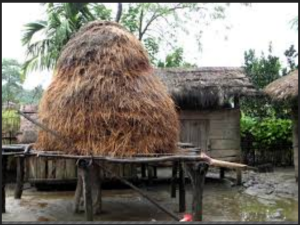 • The Jarawas : ‘Jarawa’ means ‘the people of Earth’ in Aka-Bea. This tribe consists of close to 400 people and is present in some islands of the Andaman archipelago. Much is talked about this tribe due to their complete isolation from the rest of the world. Their way of life is completely different from ours and they still follow the elementary methodologies in leading their life. Due to the building of the Andaman Grand Trunk Road, the contact between the Jarawas and the outside world has increased. However, it is dangerous for them as they are at great risk of diseases that may be carried by tourists. Everything from huts to clothes to food to crafts is made from Nature’s produce. They do not practice shifting agriculture which is used by many other rural units. They respect the soil and give it time to regenerate and recuperate before they cultivate on the same patch again. The hunter-gatherer tools, weapons and handicrafts all indicate that they are eco-friendly and have clear knowledge of the best characters from the surrounding flora and fauna that makes the best handicrafts.

There are many more such eco-friendly tribes in India including the Khasi tribe, the Bhils, the Angs, etc. Tribal people in India have great knowledge of Nature and its resources and hand it down to the next generation. The knowledge that sets them apart is that Nature provides for all our needs but not our wants and greed. Maybe the next time you whine about the traffic jam or the air conditioner not working, you should think of the true environmentalists, the tribal people. Maybe you should not make fun of them because their ways of life are different than yours. In fact, they are far superior to us. We had better learn from them and learn fast.