Rain .The word alone radiates freshness. But, what if this rain turns into an intoxicating, lethal fluid that would pour its atrocious devastating impact on us? Yes, we are talking about the acid rain ! What exactly is acid rain? It is actually a precipitation that’s interspersed with nitric and sulphuric acids in great amounts […]

Rain .The word alone radiates freshness.
But, what if this rain turns into an intoxicating, lethal fluid that would pour its atrocious devastating impact on us?
Yes, we are talking about the acid rain ! 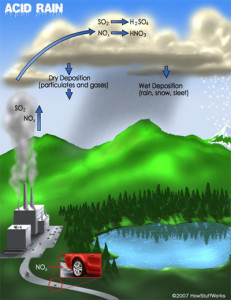 What exactly is acid rain?
It is actually a precipitation that’s interspersed with nitric and sulphuric acids in great amounts and also has low pH (hydrogen ions to a greater extent).
It can acquire various forms like fog or snow, mostly occurring in areas with a cooler climate.

How does it occur?
It mainly occurs due to the sulphur dioxide and nitrogen dioxides that are released into the atmosphere in various forms like burning of fossil fuels in industries , automobiles etc. They then, combine with water or oxygen to form acidic fluids. When they pour down on the earth, they penetrate deeper into the soil and make their way into the ground waters and in turn into the water systems.

The toxic chemicals that lie concealed in the acid rain have resulted in the extinction of numerous living organisms. The main victims being the fishes, the other aquatic animals and the like.
Wait a minute.
Aren’t we talking about the whole food chain that unfortunately forms a part of this scenario too? Including the human beings as well!!
No matter how much tolerance an organism might possess, eventually the food chain spares none. For instance, the birds which consume these aquatic animals and the rest of the eco-system that consumes the birds. It’s this erratic chain that continues to form a threat and the grave toxicity taking its prominence several notches higher. 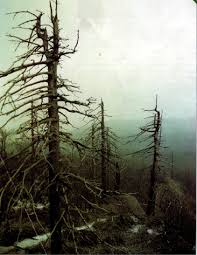 What are the environmental effects of acid rain?
This reminds me of Darwin’s ‘Survival of the fittest’. It all works on this. It’s only the species that have a high degree of tolerance that survive in the end.
*Aquatic life:
In sensitive streams and lakes that are affected by acid rain, these aquatic animals like crayfish, clam cannot survive long.
Acid rain has ample drawbacks but most of these ecological effects are pertaining to aquatic life alone!
*Forests:
Acid rain also results in a mild cataclysmic effect in the dense forests and wildlife. The spruce-fir forests in Eastern United States are apparently declining due to this. Moreover, the trees are more prone to be effected by diseases, pests and abnormal temperatures.

*Soil:
The toxic chemicals in these acids not only dive deeper into the soil but also rob it off its nutrients like magnesium, calcium and release aluminum into the soil which restrains the trees from absorbing water from the soil.
*Lakes and streams:
Acid rain effects can be divided into two kinds: Chronic and Episodic.
Chronic is a grave effect among the two as it is the result of long term acidification or due to the continuous release of toxic chemicals .It makes the fishes and other aquatic animals vulnerable and eventually destroys them by increasing the alkalinity .The areas where alkalinity is high, acidic rain effects further spread its tentacles and tighten its grip on the surrounding environment.
Episodic is due to the sudden acidification during rainstorms. It causes abrupt changes in the water chemistry which can be termed as lethal for the aquatic life.

How do we prevent this?
*Now that we already know that acid rain is caused by factories, the prevention can also be done by them by releasing fewer toxic chemicals into the gullible environment. That is not all. Even we can do this, partly by reducing the use of electricity which in turn reduces the chemicals released by the power plants.
* Toxic emission from vehicles should also be reduced by taking public transport as an alternative and as we all know walking is any day better. So why don’t we walk a few miles, instead?
*Monuments:
Acid rain has affected the historic monuments and buildings too .The calcium carbonate combines with the sulphate in the acid rain and chemically transforms into calcium sulphate .This calcium sulphate is eventually washed away by the rain and causes deterioration of the building composition.

No matter how much the consequences of acid rains are attempted to be suppressed, the effects are severely intractable and hard to be wiped off easily. 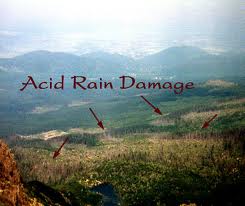 How safe are human beings?
*The compounds containing sulphate and nitrate ions are very harmful and can cause respiratory problems by going deeper into the lungs.
* They have also resulted in a number of cases of arthritis and bronchitis and several other lung and heart disorders.
*Acid fog and acid snow can cause much serious damage by skin infections.
*Besides, consuming fruits and vegetables exposed to acid rain may also indirectly seem to be harmful to mankind.
* The children are more susceptible to respiratory and other problems caused by the toxicity.
* There have been several cases of Alzheimer’s as well.

Doesn’t that all eventually coalesce into a crystal clear image that we are apparently vulnerable to this vengeful act of nature and not to forget, solely responsible for the process as well.
We attempt to ruin the environment and on the contrary, the environment does the same to us.
It does seem ironic, but don’t you feel that, at the end, it only seems fair?