Within minutes, it was all over for the leopardess. She had fought valiantly but claws and canines do not match up to bullets and rifles. Earlier, a tranquilizer shotgun had been tried but to no avail. The leopardess died just like her two previous counterparts had. It was rather sad to be sure. Such brilliant […]

Within minutes, it was all over for the leopardess. She had fought valiantly but claws and canines do not match up to bullets and rifles. Earlier, a tranquilizer shotgun had been tried but to no avail. The leopardess died just like her two previous counterparts had. It was rather sad to be sure. Such brilliant rosettes, such delicate paws and such fierce jaws: all of it wasted by three bullets. Under normal conditions, I would vehemently condemn the men with the rifles. But the blame cannot be put on any party wholly. The leopardess is mourned by a lot many of us but the seven people that it had killed in one month are mourned by a lot more, including young children, old parents and newly-wed brides. 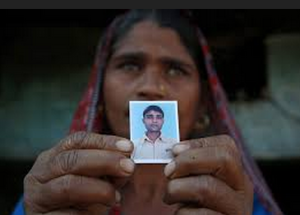 The humans were easy preys to this man-eater leopardess and it is best to take it down before it intensifies its hunger. Of course, gunning down an animal listed as an endangered species should be the last resort and assuredly, it was. But, it was a MAN EATER.

There are several reasons for a big cat to leave its natural preys and find satiety in human flesh. If the animal is old and injured, it can no longer match the speed and skill of its prey and instead of starving to death, it prolongs life by ambushing vulnerable villagers that might live on the outskirts of the forest.

Most tigresses and leopardesses turn to killing human beings when they have more stomachs to fill than their own, that is, when they have young cubs to rear. They have to go out for hunts more often and the surety of killing a prey successfully is low. This condition will not do for the growing cubs and the mother knows it well. It’s solution? Kill unsuspecting humans with little or no offer of defense. In these cases, even after the cubs have grown up and found their own territories, the mother might just continue to prey upon men out of sheer laziness or habit. However, the cubs may or may not grow up to become man eaters even though they are used to human flesh. In most cases, thankfully, they become natural hunters and prey upon their own natural preys. The Dudhwa National Park in Uttar Pradesh has seen many man eating tigresses, some who mended their ways on their own and some who had to be taken down. However, no cub ever grew up to be a man-eater.

Both male and female big cats, especially leopards feel the threat and react out of defense when they sense human presence around them. Normally, any wild animal would shun conflict in these ‘fight-or-flight’ conditions but having been used to humans all around them constantly has prompted them to be bolder but not wiser. 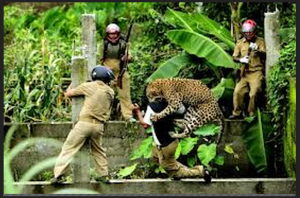 When caught and left out in some other forest or zone of the same forest, big cats tend to trace their way back to their original territory, crossing human settlements, agricultural fields and even urban areas. The Pilibhit young male tiger was out on the run for more than one month and had been prowling in densely populated human areas near Banthra, Lucknow in the summer of 2011. Thankfully it did not hurt anyone but the risk was always there. Care should be taken that such predators are rehabilitated in their own area after being treated for injuries or used for database updates.
It is not completely clear why some big cats give up their human prey luxury and come back to wild preys. Maybe this is so due to the fact that the favored prey density in their territory goes down appreciably and they are forced to fend for themselves by preying on humans. 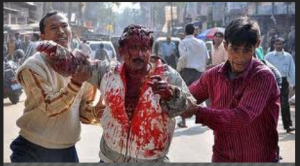 Maybe it is the case of mistaken identity. All tiger attacks on humans occur from behind when they do not face us. It is a natural predator strategy. A lot of Indian villagers attend to Nature’s call out in the open, on the buffer zones of forests. Predators having roamed the forest at night are on their return journey to the core zone when they spot movement and an animal crouching behind bushes. Answering with innate response, they pounce and kill the animal. Only, this animal is a villager.
Man-animal conflicts are on the rise and so is the risk of big cats turning to human flesh. Today, maximum reports of man-eaters are from Maharasthra which is blessed with a large leopard population and Uttar Pradesh with quite a lot of tigers killing men. For the last two years although there have been no such reports. The Sundarbans of West Bengal are famous for the Royal Bengal tiger but infamous for the man-animal conflicts and attacks on fishermen in the creeks.

The highly infamous man-eaters of Kumaon had to be shot by Jim Corbett.

They were man-made man-eaters. After the plague of 1896, the corpses were in such large numbers and due to the fear of infection people just threw them down the mountain edge instead of cremation or burial. Predators by nature, leopards underwent a sea-change and began scavenging upon the corpses. It was shortly after that that reports increased about leopard and tiger attacks on the villagers of the Kumaon and Garhwal. Humans were majorly at fault for inducing the man-eating streak in so many predators. 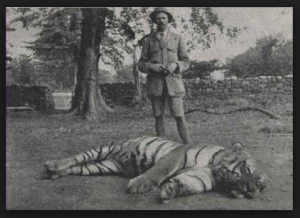 We humans continue to feel at home in their home and expect the big cats to be all welcoming so that we can stomp around on their land. Well, they are not so forgiving. Maybe we should mend our ways and be content with our own land. Also, we should always respect the laws of the wild for it is they who are right and original and we who have changed for the worse. Man-eating big cats are a threat but not as much we are a threat to them.