Over the last century, human activities had a profound impact on the environment. Fossil fuel consumption, deforestation and other unsustainable land use practices have resulted in a dramatic increase of carbon dioxide and other greenhouse gases emissions into the atmosphere leading to various serious environmental issues like global warming, acid rain, etc. Most studies and […]

Over the last century, human activities had a profound impact on the environment. Fossil fuel consumption, deforestation and other unsustainable land use practices have resulted in a dramatic increase of carbon dioxide and other greenhouse gases emissions into the atmosphere leading to various serious environmental issues like global warming, acid rain, etc. Most studies and research believe that human interference and activities have induced the carbon dioxide levels to increase and thus the human-induced climate warming currently affecting the whole world, the whole planet. If this trend continues, climate change will be the inevitable outcome of human stubbornness. The long term affects of this average temperature is unknown, whereas the adverse and immediate ones can be seen clearly in the form of floods in one region whereas droughts in the other, rise in sea level, increased severity of storms destructing life and property, destructing the earth.
The natural production and absorption of carbon dioxide is achieved through the earth’s biosphere and oceans. However, mankind has altered the natural carbon cycle by burning coal, oil, natural gas, and wood. Each of these activities has increased in scale and distribution.
One way to manage carbon is to use energy more efficiently to reduce our need for a major energy and carbon source-fossil fuel combustion. Another way is to increase our use of low carbon and carbon free fuels and technologies (nuclear power and renewable sources of energy such as solar energy, hydro power, wind power, and biomass fuels). These are the solution to a better planet to exist in.
The most recent alternative for managing carbon is sequestration. Carbon sequestration refers to the provision of long term storage of carbon in the terrestrial biosphere, underground, or oceans, to reduce the build up of carbon dioxide (which is the principle green house gas of the time) concentrations in the atmosphere. This is accomplished by maintaining or enhancing natural processes, or the development of new techniques to dispose-off carbon.
The main natural sinks of carbon dioxide are oceans that take up one third of emissions, plants and other organisms that use carbon dioxide for photosynthesis and remove carbon from the atmosphere by incorporating it into biomass and release oxygen into the atmosphere, and lastly the soils which contain more organic carbon than is contained in vegetation and atmosphere together. 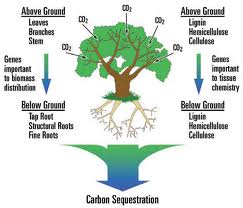 However, the natural carbon dioxide sequestration in the environment is not able to cope up with the increasing emissions, thus natural sequestration processes need to be enhanced and take into leap over the artificial sequestration techniques.
• For instance reforestation could be considered as an enhancement and thus increase the capacity of forests to act as a sink. Increasing the forest cover would mean increased plants to correct the carbon cycle by using up more and more carbon dioxide which is one of the primary reasons for green house effect, global warming and thus all the interrelated environmental issues.
• The oceans, micrometer sized iron particles in the form of hemalite (iron oxide) or melanterite (iron sulphate) are added to water to increase the carbon sequestration efficiency. The additions of iron particles stimulate the growth of phytoplankton, which in turn remove significant quantities of carbon dioxide from the atmosphere via photosynthesis. However, phytoplanktons have a complex effect on cloud formation by the means of release of dimethyl sulphide (DMS).
• In soil, no-till farming, cover cropping and crop rotation methods are used to significantly enhance carbon sequestration.
• Conversion of pastureland with good management of grazing can also increase carbon sequestration in soils. 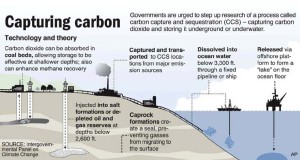 For carbon to sequestrated artificially (i.e. besides the natural sequestration and their enhancements of the carbon emissions) it must be captured at first, or it must be significantly delayed or prevented from being re-released in the atmosphere (by combustion decay , etc) from an existing carbon rich material, by being incorporated into an enduring usage (such as in construction). Thereafter it can be passively stored or remained productively utilized over time in a variety of ways.
In the oceans the carbon dioxide is directly pumped into the water at depth and is expected to form lakes of liquid carbon dioxide at the bottom. Most of the carbon dioxide remains dissolved. 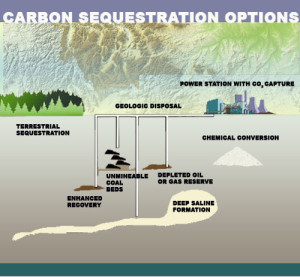 Sustainable development refers to the technique and art of economic development along with environmental development and both of these go hand in hand satisfying the needs of the human efficiently with the limited resources available. Thus carbon dioxide and other green house gases are being considered for the carbon trading under clean development mechanism. Carbon trading is carried out in terms of carbon credits which are the offsets or grant given to individuals and companies for releasing certain amounts of carbon dioxide into the atmosphere. 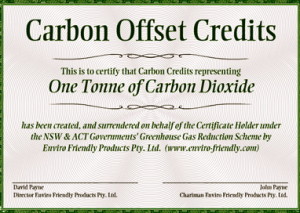 Carbon credits are the Certified Emissions Reductions (CERs) where each unit is equivalent to the reduction of one metric tonne of carbon dioxide based on the monitored difference between baseline and actual emissions which is made possible with the carbon sequestration technique.