You are here: Home \ Environment \ Resources \ Four Days In a Forest…
Environment
0

Four Days In a Forest…

It was 2006 and i was living in a residential school in one of the western districts of Tamil Nadu. Like how every school will be having picnics and tour’s, we had a tour that year. But it’s a new step this time. The school was taking us to one of a late discovered lake […]

It was 2006 and i was living in a residential school in one of the western districts of Tamil Nadu. Like how every school will be having picnics and tour’s, we had a tour that year. But it’s a new step this time. The school was taking us to one of a late discovered lake sites. So, not many took the package. It was just a 50 plus students. The site which we traveled to was Berijam lake which is three km in length. The lake is surrounded by the Berijam forest. The source of water to that lake is from a catchment basin which receives  water from the upper Palani hills which is a continuation of the western ghats. 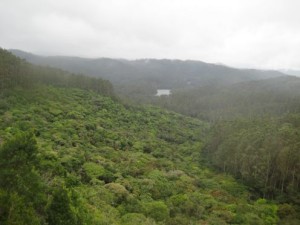 This picture was taken from an observatory nearby and you could see the lake there.

So, why did i mention that its a late discovered lakes? Apparently it was first seen by an infantry regiment led by colonel Douglas Hamilton of the 1860’s and given name in the early 1900’s. Hence the name to the fort which was built near that lake was given Fort Hamilton. Not everyone is permitted to go see that lake. You have to get some serious permission from the forest department to go in. You will be accompanied by a forest ranger and there will be a humpty number of rules you have to follow. 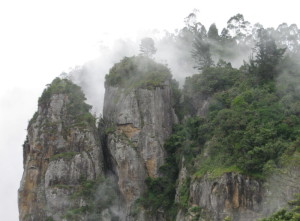 Luckily, one of my school directors had a forest ranger as a friend and he was our guide through the forest, all four days. We started our trip with the bus, once we reached the police check post, we had to walk to the site. The day time temperature there will be around 15 degree celcius. Once we reached the lake, where our tents were laid down. The first day is all about following the rules. We are allowed to eat packed snacks, but not allowed to throw the packets around. And the explanation he gave for that following rule is still in  my ears. I mean, he knows students wont follow the rules, if you ordered them. So, he said “If you throw the waste packets around, I will not scold you, but some animal here is going to eat that plastic paper and is going to die. And you don’t want the death of an innocent animal on your hands”.

We had our own chef there, one of the best foods I have ever eaten. The food was cooked from the water taken from that lake. The water was very good. In fact, the lake was acting as a reservoir for a village near by. Boating is not allowed in that lake. Some rules regarding keeping your voice level below a certain decibel level. He said that if the noise gets increased the animals nearby would leave the location. The next day morning we went for a trekking. Food was given to us packed and we kept it in our bags without knowing that we were going for a long trek. We were split in into groups with a teacher to each group. It was quiet all around except for the noise of the animals and wind. First person and the last person were given a walky-talky, since it is highly likely you will loose the path.

On the way we saw many wild animals, mostly elephants, deers and monkeys. But the ranger told us that Berijam is famous for Bisons followed by many rules which we ought to do in case we encountered a wild animal, especially a bison. In the afternoon, we stopped at a place and had our lunch and started walking further. We reached the camp site around 6 p.m after some serious eco-education and tiredness. The second day went well.

On the Third day we were taken for another trekking, but this time its up the hills. We started our journey by eleven in the morning. After a long trek, we had lunch on the slopes of a hill. Due to a mistaken route we took, it became late for us to go to the camp site. hence we decided to stay on top of the hills for the night. So, The chef cooked us soup for that night and we had some bread. Apparently the ranger knew that this could happen and he always brings the chef and some bread with us. That night none of us slept. At twelve midnight, we had a camp fire in a open space and sat around it. The forest ranger sat with us and told ghost stories,  about the history of that forest and about his personal life. At three in early morning every body started telling jokes and suddenly we heard loud thumping sound from the ground. The ranger told us to gather around and said it was a herd of bisons nearby running. After the sunrise, we started to return to the camp site. On the way we saw the foot prints of the bisons from before night.

When we returned to the camp, it started raining and everyone was in our tents. After the rain stopped, we came out and noticed that there were leeches all over our body. The ranger told us not to do anything to the leeches as it wants only five ml of our bloods and it comes away after it takes enough. If we did manually take it away, there will be blood running non-stop. Also the lake had water dogs in it. One of the teachers kept his hand in the lake to drink the water and noticed the animal in it. It was the last day of our trip and I couldn’t swallow the fact that we were leaving that beautiful heaven. The ranger gave his last speech and we all went and hugged him and said good bye. The important thing to notice here is, recently I had seen in a website that the lake is having more visitors now a days and the site is just getting polluted of noise and waste. There are only few fresh water ecosystem places left in our country like the Berijam lake and steps should be taken to restrict the number of users per day and the rules must be made stricter.