You are here: Home \ Environment \ Global Warming- leading to disappearing of land
Environment
0

As the theme of this Environment Day on 5 June suggests ” Raise your voice, not the sea level”, lets see how is the problem became a threat to us. “Disputed Island in Bay of Bengal Disappears”. This was the headline carried by news services all over […] 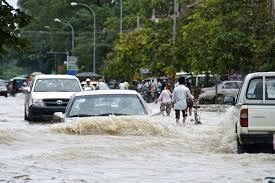 Raise your voice, not the sea level

As the theme of this Environment Day on 5 June suggests ” Raise your voice, not the sea level”, lets see how is the problem became a threat to us. “Disputed Island in Bay of Bengal Disappears”. This was the headline carried by news services all over the world when an island having an area of 10,000 sq meters ceased to exist. This marks one of the first instances of catastrophic impact of global warming on our planet.  Global warming has been detected in a number of natural systems. Some of these changes are described in the section on observed temperature changes, e.g., sea level rise and widespread decreases in snow and ice extent. Anthropogenic forcing has likely contributed to some of the observed changes, including sea level rise, changes in climate extremes (such as the number of warm and cold days), declines in Arctic sea ice extent, and to glacier retreat. Over the 21st century, the IPCC projects that global mean sea level could rise by 0.18-0.59 m. The IPCC do not provide a best estimate of global mean sea level rise, and their upper estimate of 59 cm is not an upper-bound, i.e., global mean sea level could rise by more than 59 cm by 2100. The IPCC’s projections are conservative, and may underestimate future sea level rise.  Over the 21st century, Parris and others suggest that global mean sea level could rise by 0.2 to 2.0 m (0.7-6.6 ft), relative to mean sea level in 1992. Widespread coastal flooding would be expected if several degrees of warming is sustained for millennia.  For example, sustained global warming of more than 2 °C (relative to pre-industrial levels) could lead to eventual sea level rise of around 1 to 4 m due to thermal expansion of sea water and the melting of glaciers and small ice caps.  Melting of the Greenland ice sheet could contribute an additional 4 to 7.5 m over many thousands of years.

New Moore Island or South Talpatti island was first discovered in 1974. Situated 2 kilometers from the mouth of Hariabhanga River, the island had an area of 2500 sq meters. But gradually, submerged shoals off the coast of the island were uncovered in later surveys. The island was 3.5 kilometers in length and 3 kilometers in width with an elevation of about 2 meters. Though the island was uninhabited, it was a highly disputed area, as both India and Bangladesh claimed the island as a part of their geographical area. The presence of island proved to be a major factor in deciding the maritime border of both the nations. The dispute started with hoisting of Indian flag on the island in 1981. But the dispute seems to be immaterial in the light of recent events.

A study team led by Sugato Hazra, director of Jadavpur university’s school of Oceanography, studied the data from the satellite images in 2009. The disappearance of the island is attributed mainly to the fact that the temperature of the region is rising at the rate of about 0.4 degree Celsius annually. This along with coastal erosion and super cyclones has further added to the woes of the region. Four super cyclones hit southern parts of the Sunderbans between 2007 and 2009.

A similar incident took place over fourteen years ago when in 1996, Lohachara island in the Hooghly estuary disappeared. All the inhabitants amounting to a total of 4000 people had to be relocated. Though the island re emerged later, it hasn’t yet been made sure if the the cause in that case was global warming.

But global warming seems to be the reason for the disappearance of New Moore Island. Not only the in the northern parts of Bay Of Bengal but all over the world, similar incidents can occur in near future. Maldives faces total desolation in the face of rising sea levels. President Nasheed recently brought attention to rising sea levels by holding a cabinet meeting underwater. Similarly Tuvalu and Kiribati, other low-lying countries in South Pacific between Hawaii and Australia will be affected by any rise in the sea levels. Venice, which happens to be one of the most scenic places in the world, is laced with canals. It is built on pilings over a lagoon and is sinking in the mud of the lagoon by 4 inches per year.

Global warming has not only affected the weather cycles, surface temperature but is also continuously melting the polar ice caps. This has led to an increase in sea level around the world. This is threatening the coastal areas throughout the planet. These incidents are increasing at an alarming rate.

Human influence has been detected in warming of the atmosphere and the ocean, in changes in the global water cycle, in reductions in snow and ice, in global mean sea level rise, and in changes in some climate extremes. It is extremely likely (95-100%) that human influence has been the dominant cause of the observed warming since the mid-20th century.

Unless there are steps being taken that are aimed towards slowing the vehemence of global warming, the situation would go beyond repair and many more coastal areas will face similar fate. Our little concern could do a great help towards protecting the earth from further degradation. First of all, we should learn prioritize our needs rather than becoming greedy for everything available. All of us know that use of Refrigerators, ACs, compressed cans like deodorants produces harmful gases like CFCs (Chlorofluoro carbons) and freons which further depletes the ozone layer which acts as a protecting covering for us. The private vehicles we use for every short distance too, just to make us feel comfortable can be a means of great discomfort for the planet and ultimately all of us. Fuels used in vehicles emit harmful gases like carbon dioxide, carbon monoxide etc. These gases are the main reason for heating up of the earth. So, next time whenever you have a chance of protecting the Earth, please do contribute to it. Use earthen pots for drinking cold water, use public transport as it will reduce emission of carbon and also help in smooth traffic .To keep our blue planet turning entirely to a big blue drop in the universe, we should take notice and to everything within our power to impede such environmental problems.