INTERFERENCE OF EXTERNAL LIGHT OVER NATURAL?

We have always learnt about how human activities played a vital role in environmental pollution and have also learnt the different types of pollution present in our environment. But we rarely get to hear about light pollution. If we go around asking people what is light pollution, probably most of the people will search it […]

We have always learnt about how human activities played a vital role in environmental pollution and have also learnt the different types of pollution present in our environment. But we rarely get to hear about light pollution. If we go around asking people what is light pollution, probably most of the people will search it up on Google or any other websites. Some may even say that they have not heard of it.

The effectiveness of the sky glow and glare in the sky are caused by either one of the factors, which are natural or man-made. Now, we will discuss about the types present in the light pollution. There are 3 types of light pollution. They are sky glow, light trespass and glare. What do they do in the light pollution? Sky glow will have five natural factors such as sun rays getting reflected from the surface of the earth and moon, light scattering in the atmosphere, diffusion of masses of the dust present in the star, and from the upper atmosphere the glow of the air fainting. It will only consider the resources taken from humans. The brightness of the sky will increase due to electric lighting and will be a man- made source. It is also dependent of immediate weather conditions, quantity of dust and gas present in the atmosphere and the direction in which it is viewed.

The next type of light pollution is light trespass. Light trespass is basically the unwanted light which gets reflected. This basically ruins the sleep of the people whose windows are getting them and makes the sky even darker for them which will result in the blockage of the evening view.

The last type of light pollution is glare. This term “glare” is defined as the discomfort of bright light taken from the poor built lamp posts. Glare is further divided into three sub-categories. They are binding glare, disability glare and discomfort glare. These sub-categories have different functions which are operating it. Starting with the sub category which is binding glare, it describes the effect which caused into the sun. 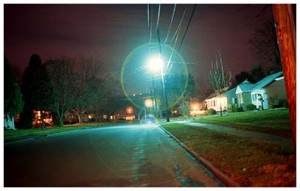 Now, that we have some knowledge about different types and their sub-categories. Let’s continue further by asking everyone a question. What are the consequences? Well, the consequences are waste energy, animals and human health and psychology, disruption of ecosystem, effect of astronomy, and increase in atmospheric pollution. How is light a part of the wasting energy? An interesting fact here is, that one-fourth of the energy is consumed by the lightning worldwide. Basically, it is uses the high quality light bulbs, which consumes higher energy as well as it is very expensive. The next consequence is animals and human health and its psychology. Due to the light, the certain health effects which may happen to humans will be increase in headaches, fatigue, it also increases the stress and anxiety. Whereas for the animals, the change of mood and anxiety will occur. Also the animals which are awake in the morning and the animals which are awake in the night, it will affect them as the alertness will also change.

The next consequence mentioned is disruption of ecosystem. One factor which affects the organisms as well as the ecosystems is the artificial light. This factor is also known as ecological light pollution. Generally, during the night, turning on the street light is for a genuine reason and it will can be beneficial as well. But in some way is not beneficial as it can damage the individual species and disturb its ecosystem.  This type of pollution can also give a negative impact on the plants and also on the animals’ physiology. An example would be when the lamp post is turned on, it will attract many insects and spiders, so some spiders don’t mind building their webs while some don’t. From this example we can say that depending of the species frequencies and food webs the light disturbs them in the night.

Now, the question is how to reduce this type of pollution? Some ways are

In conclusion, save the electricity as much as you can as well as try to reduce the usage of light.