First things first. Who likes French Fries? Or rather, who doesn’t? That latter question will give an answer that can probably be counted on a single hand. What we can infer from that is that almost everybody loves French Fries, God, they really are heavenly. And that everyone is going to become obese in the […]

First things first. Who likes French Fries? Or rather, who doesn’t? That latter question will give an answer that can probably be counted on a single hand. What we can infer from that is that almost everybody loves French Fries, God, they really are heavenly. And that everyone is going to become obese in the near future. But this article is not really about food. Rather, it will explore what it is to feel like a French Fry. Sounds weird, doesn’t it? Well, that it may, but it actually is a very real possibility. If nothing in the world is changed. If all rates of gas emissions are kept exactly the same, I can safely say that the Earth will literally become one huge French Fries maker within my lifetime. I admit, that is a loose interpretation of the word ‘safe’, but you get my drift.

So, what is this phenomenon that is going to make our entire planet a gob-smackingly giant wok? It is something that would have been heard of my most, but actively opposed by shockingly few. The answer is, no points for guessing, ozone depletion of course.

As does any discussion on ozone depletion, this too will begin with a short introduction to what ozone really is. It is a curious little molecule, ozone. Formed in the higher reaches of the atmosphere, namely, the stratosphere, ozone is basically an allotrope of oxygen, one which has three molecules of oxygen. It forms a kind of a protective blanket, that envelopes the entire Earth at a distance of about nine to twenty-two miles above the Earth’s surface. Most of the ozone layer, almost ninety percent of it occurs in the Stratosphere, starting from about six to eleven miles above the Earth’s surface to about fifty miles above it.

One would expect that the temperature of the Earth would become lower and lower as we go higher and higher as it does when reach the higher points of a mountain. But once again, a different phenomenon takes place in the ozone layer, or ozonosphere as it is more popularly called. Here, what happens is that ultra violet radiations from the sun are absorbed by oxygen molecules (which have two oxygen atoms), causing them to split and form oxygen radicals (which have only one oxygen atom). These oxygen radicals are highly reactive and react with oxygen molecules to form the ozone layer that saves us all from being fried by the ultra violet component of the solar radiation. When the ozone absorbs ultra violet radiation, it splits to form an oxygen molecule and an oxygen atom again. This cycle goes on continuously. It is terminated when an oxygen atom combines with an ozone molecule to form oxygen molecules.

Thus, it is clear that if it weren’t for the ozone layer, the ultra violet radiation would reach the Earth, and the rest, as they say is history. Hmm, am not really sure if it is called history if there is no future to study it, but for technical purposes, let’s go with history. Now, that we have established its importance, let’s see exactly how much damage we have inflicted on our Holey Saviour.

While one can argue that refrigeration was one of the greatest inventions of mankind which was the main reason that food wastage was reduced and helped feed more people, the effect that refrigeration has had on the environment. Refrigerators emit unreactive compounds called CFCs (Chloro Fluoro Carbons) which reach the stratosphere without being acted upon in the troposphere as they are unreactive. But in the stratosphere, due to ultra violet radiation, CFCs are broken down to form chlorine radicals which have a very high reactivity because of the presence of a free electron in them. This causes the chlorine radical to react with ozone to form oxygen atoms.

ClO + O3 → Cl + 2 O2: The ClO from the previous reaction destroys a second ozone molecule and recreates the original chlorine atom, which can repeat the first reaction and continue to destroy ozone. 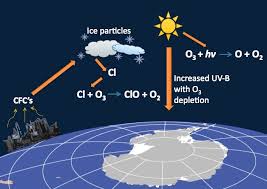 Thus ozone is destroyed without absorbing the ultra violet component of the solar radiation. On an average, a single chlorine molecule is able to react with and destroy a hundred thousand ozone molecules. That simple statement can give a fair idea of how much destruction a single household can cause to our environment.

Thus, there is an immediate need for all countries to adopt the Montreal Protocol which bans the use of CFCs and look for alternate sources of cooling. Ozone depletion has already caused a gaping hole over the polar region due to the extreme cold in the region which causes the formation of a polar vortex which results ultimately in ozone depletion. 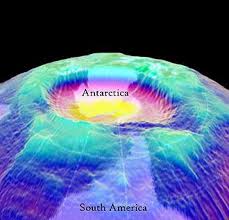 Efforts have been made to prevent further depletion, and reports say that the size of the ozone hole was smallest in 2012 since 2002 but we still have a long way to go to ensure that our life cycle is better than that of a potato’s.