It’s another auspicious day, you have accompanied your family to take a dip in the holy river. It was a long journey, but the sky is blue, the birds are chirping, there is a temple bell chiming softly in the distance. You step onto the banks, your toes teasing the water. You are about to […] 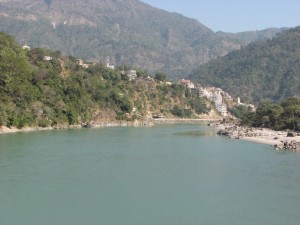 It’s another auspicious day, you have accompanied your family to take a dip in the holy river. It was a long journey, but the sky is blue, the birds are chirping, there is a temple bell chiming softly in the distance. You step onto the banks, your toes teasing the water. You are about to be cleansed. Feet go in first, then the water is up to your waist, your chest, your neck, and finally your head too. The cooling liquid flows over your mortal body, cleansing your soul. But what is this?? You come out even filthier! Eeek, you’ve just been baptized in sewage!!

Don’t worry my friend, the thick sludge that you are in is in fact the Ganges (the Ganga) river. Your soul is most certainly purified according to religious texts, although you may need a serious bath. And a doctor. And medication. Only trivial things like that, you know… 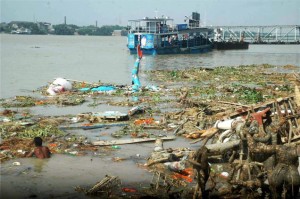 Oh and if you haven’t already, then you most certainly won’t want to swallow any of the water. Might only lead to minor inconveniences like food poisoning, diarrhea, cancer, painful death, and a fat hospital bill. If you have already, then… well at least your soul is clean.

Now now, don’t panic. The water contains chromium levels that are only 70 times the recommended maximum level, courtesy the 400 tanneries in Kanpur that have set up such a marvelously inadequate treatment plant. And the National Cancer Registry Programme (NCRP) under the Indian Council of Medical Research in 2012 only suggested that those living along its banks were more prone to cancer than anyone anywhere else in the country. While we’re at it, the W.H.O. did recommend a ‘safe’ level for chemicals and bacteria in the water, and the levels in the Ganges are only 3000 times more. Just 3000. Such a measly number… What do the W.H.O. know anyway huh… They’re just like, one of the biggest public health organizations. Ha!

They should learn from the Uttarakhand Environment Protection and Pollution Control Board (UEPPCB). Now look at the size of that name. How impressive is that! Even the acronym is utterly unpronounceable! Go Indians! Anyway, the UEPPCB (pronounced oo-eh-pkb. Watch out for all those consonants at the end. They are a little impossible to pronounce. But if you try then you may succeed) classified water into 4 categories. Category A is drinkable water. B is safe for bathing. C is safe for agriculture, and D is excessive pollution. Want to guess what category the Ganges water falls into? Yes, you’re right! The Ganges scores a solid D minus! And so, us Indians will happily bathe in it. Why, you ask? Because we are Indian and we are awesome. Yup, we don’t care if the chance of acute gastrointestinal disease is 66%. If we want to have a bath, we do. Deal with it! 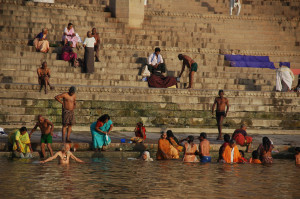 A large portion of the muck in the river is because of such activities only. Bathing, laundry, public defecation, they all contribute generously (Yes, if you have taken a dip you may go have another bath… I will understand. Public defecation on oneself is not entirely desirable).

Industrial waste contributes too. All the tanneries, textile mills, distilleries, slaughterhouses, chemical plants, and hospitals that dump their waste deserve honourable mention. Industrial effluents account for 12% of the effluents present in the river. Not only is it not biodegradable, this stuff is toxic too. What would the point be if it weren’t toxic, right?

We have a few Dams too that are responsible for the state the Ganges is in. The Haridwar Dam is especially notorious for greatly diminishing the flow of the river. The Farakka Barrage is another. It was originally built to divert fresh water to the Hooghly River, but has had the adverse effect of damaging the soil and ground water along the river by increasing its salinity. It has led to many disputes between India and Bangladesh too as an added bonus. Oh, and the government is planning 300 more dams along the river and its tributaries, against the recommendation of the government-commissioned green panel it set up (who want 34 of the dams scrapped because of environmental reasons). We love our damn Dams here. 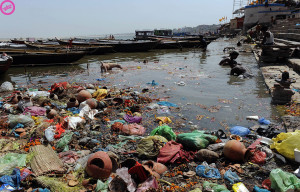 I mean, the river is unique, you know. It can retain extremely high levels of oxygen, and is thought to have acteriophages — little things that are supposed to destroy bacteria that cause cholera and dysentery. What a nuisance! What’s the point if it cannot even provide us with dysentery huh? We all want dysentery, don’t we? Phooey.

I probably should mention it is considered sacred too huh. Yup, it is, and because it’s so sacred we go and fill it up with junk from our rituals. And ritualistic baths. And our ritualistic food and plastic. Can’t be an Indian if food is not involved, or throwing plastic over our shoulder… Most of the rituals that are performed are bogus, they have no grounding in the Hindu scriptures, but some saadhu (sage) must have recommended you do this so that you get less homework or something, and so you do. He must have been a genuine saadhu, I mean, he had a very genuine saadhu beard and all, didn’t he? Uh-huh, you can always trust the beard.

Oh, and there are corpses that float down the river too. Some rituals involve pouring water from the holy river over the corpse as a last rite. In other cases, the corpse is left to drift through the river, in the hope that the soul will be taken up into heaven. Many sprinkle the ash after cremation into the river. This doesn’t really sit too well with rituals that mean you need to drink the water. Because there are many who do that too. Not a very bright idea. But diseases are good for your health right! So pour me a pint too! And who doesn’t love a dead body that’ll suddenly surface and scare the pants off you eh…

All in all, the Ganges is the sixth most polluted river in the world (another top rank for our India), and there are a few million people dunking themselves in it every day. Its pollution level is predicted to rise by only a 100% in the near future. Man, that’s like, SO RAD! Wicked! Now, time for my bath.