Water Saving this Summer: at Home

The queue of buckets and containers and people and bottles snaked its way from the municipality tap and farther. The scorching sun overhead, the farmer looked up one last time with a faint hope of rain clouds, standing on his parched land. The wandering street kid cannot even recall when was the last time that […]

The queue of buckets and containers and people and bottles snaked its way from the municipality tap and farther. The scorching sun overhead, the farmer looked up one last time with a faint hope of rain clouds, standing on his parched land. The wandering street kid cannot even recall when was the last time that he had the good fortune of having potable water.
Most often, Indian summers are synonymous with water scarcity. Globally water scarcity is a perennial issue but during summers, the magnitude intensifies.

Water is one the most valuable and essential natural resources that the Earth possesses and we should do every bit to save both, its quality and quantity. Here are some ways in which we can save water at home:

1. Close the tap, please! This might sound old and heard of but this is one of the most efficient ways of saving water at home. Most of us know it and still don’t bother. While brushing your teeth, closing the tap would be a good idea, if you want your future generations to continue to enjoy the comfort of water from the faucet tap. 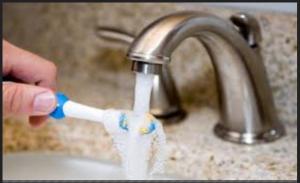 2. Re-use grey water: Grey or used water can always be re-used for other household purposes. The water left from mopping or scrubbing the floor can be used to water plants, flushing the toilet manually, etc.

3. Low flush toilets: Using newer models of toilet flushes saves more than a gallon of water a year. You can also install the specialized flush handles which allow lesser and larger volume of water into the flush, according to the pressure exerted in pulling down the lever.

4. Micro sprinklers: Instead of using hose pipes for the garden, efficient micro sprinklers can be installed. They are not very expensive and reduce your work load too! However make sure that they are well maintained and do not leak. 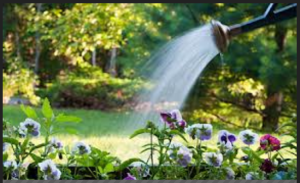 5. Fix the faucets: Making sure that there is no drip from the taps and pipes helps save water too. Replace leaky faucets and pipes. Make a careful observation of all the taps at night to make sure they are completely off. Dripping drops of water may seem trivial but is one of the biggest reasons of empty water tanks.

6. Less water for less laundry load: Ensure that the right amount of water is taken in each cycle for washing clothes. If the load is less, fill water up to the lower mark.

7. Turf issues: Choose your lawn turf according to the climatic conditions of your region. For example, if you live in a dry region, choose a draught tolerant grass for your lawn.

8. Car wash: First of all, it is not a life or death situation for your car to be washed every weekend. However if you do wish to get your car washed, head to the car washing centers where they re-use the dirty water, instead of washing your car at home.

9. Bucket in the shower: While you are waiting for the water from the shower to heat up to the suitable temperature, put a bucket under the shower so that the flowing cold water is collected in it instead of simply going to the drain. This bucket can later be used to flush the toilet.

11. Fish tank cleaning: After cleaning the fish tank, the water can be used for watering the plants or the lawn.

12. Rainwater harvesting: Rainwater harvesting may seem like something done on a large scale and involving complex procedures, equipment and technique but, harvesting rainwater can easily be done at home. You can simply keep open containers out in the rain during the rainy season. If you want to do it the complete way, building sloping roofs of the house with a drain pipe attached to the corners would do the trick. These drain pipes lead to an underground tank where rainwater is harvested. This method is used in many homes in semi-arid regions of Rajasthan in India.

13. Dish washing: While hand washing the dishes, try not washing them under the constant flow of running water. Instead, fill up the sink with water and wash the dishes in it.

14. Short showers: Everyone loves singing in the shower and being a bathroom singer and relaxing. However, long showers lose water at the rate of 5 gallons per minute and more if the showerhead is old and inefficient. Cut short your showers only to your necessity and you could save so much more water than you would imagine! 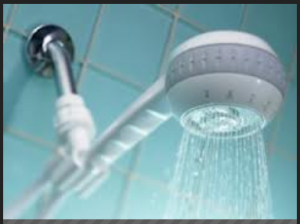 15. Add mulch cover to your garden: Adding a layer of 2-4 inches of organic matter near the roots of the trees and shrubs will decrease the rate of evaporation from the ground. This will effectively decrease the frequency of watering the garden, saving much water.

Saving water would do everyone good, the planet, the fish in the seas, the people of Bundelkhand and everyone else. Most of all, it would do you good. A lower water bill and the satisfaction of doing the right thing is such an incentive. Do your bit this summer.